The Xoom is one new gadget I can’t put down. As I wrote in part 1 of my Motorola Xoom review, it feels a lot like unwrapping a beta product when you buy a Xoom since it was rushed out the door, but it’s an addictive device.

I took it out of the house for the first time on Saturday and used it enough to drain the battery about half way. I’m a relative Android newbie, so perhaps my fascination is more with Android 3.0 than with the Xoom itself. Whatever’s going on, I’m liking it a lot.

I worked quite a bit on Saturday, but I also had to help prep for a family event. I was given a shopping list and headed off to Trader Joe’s. Being the digital household we are, I get my honey-do’s electronically by SMS. But when I got to the Trader Joe’s parking lot I discovered my iPhone’s and the Mophie Juice Pack Air I keep it in were completely drained. As I rode the escalator down into the basement-level store I fired up my Xoom and retrieved my SMS from Google Voice.

That’s when I got my first pleasant surprise of the day. I was browsing the Web in the basement level of our local shopping mall, something that’s impossible to do with my iPhone 4 on AT&T’s network. Web pages loaded very quickly on the Xoom’s browser and I ignored shopping for a few minutes as I played around with the device. 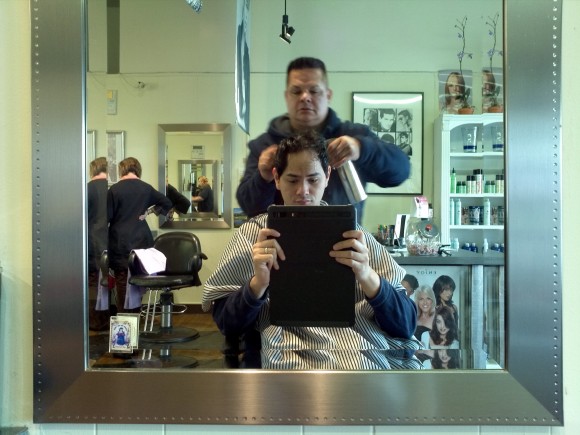 After retrieving a few bags of groceries I went to go get my haircut so I’d look presentable in family photos. Ben, the guy that cuts my air, is used to me playing with gadgets and snapping photos as he works. I snapped the above photo using the Xoom’s built-in camera. As you can see, the camera’s quality is pretty good in well-lit environments, but it’s much closer to cameraphone quality than point & shoot camera quality.

As I got my haircut I multitasked. I read a few articles using the Pulse app, which looks very nice on the Xoom. I scanned my email and wrote a few replies. The email client on the Xoom makes the iPad’s look like amateur hour. It’s that much better.

I also found myself typing much faster on the Xoom than I can on the iPad. I’m not sure why, but it’s just more comfortable for me. One major flaw in the Xoom’s keyboard layout is that the question mark key is not visible without hitting a button to pull up numerals and symbols. On the iPad’s on-screen keyboard the question mark is on the same screen as all the letters.

I really like the Xoom and I think it shows off the potential of Android tablets, but it’s not quite polished enough for me to recommend it to those who aren’t early adopters willing to put up with some hiccups. Some of the apps crashed repeatedly and the lack of Flash is really annoying to me since it was stressed when the product was announced last month.  My buying recommendation as of now is to wait until Motorola and Verizon iron out the kinds so you can actually use all the features you’re paying for. But if you’re a geek like me that’s willing to be a guinea pig I say go for it.