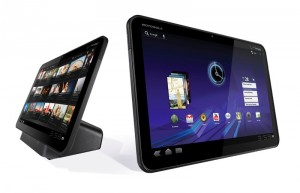 I have posted this review round-up of some early reviews of the Motorola Xoom Android 3.0 tablet over at Notebooks.com, and it is also being posted here as it may be of benefit to readers of GottaBeMobile. The Xoom represents Google’s first attempt at the tablet space as the company says that Android 3.0 Honeycomb, which is debuting on the Motorola slate, is the first version of Android to be designed for the tablet class of computing device. While previous tablets, like the Galaxy Tab, were marketed as tablets, Google says that the use of a pre-3.0 version of the Android OS meant that it wasn’t optimized for tablet.

As one of the ‘true’ first generation Android tablets, the Xoom is an interesting device and a strong iPad competitor according to early reviews of the device. However, there are still some hardware and software issues, as you’ll read in these reviews, that are present in this first-generation product. While most of these issues are small, it does warrant a recommendation for users to wait, at least until Apple’s iPad event on March 3rd, to make a decision on whether or not to pick up the tablet. Also, bear in mind that the Xoom will initially be available only in 3G, though users can opt for a free 4G LTE upgrade later that will provide faster mobile broadband speeds.

We’ll have our own review up in the near future and will compare our thoughts of the Xoom against our colleagues at other sites so stay tuned to GottaBeMobile and Notebooks.com.

The site was overall impress with the tablet and the new Android 3.0 Honeycomb UI, noting that it was speedy and is a true competitor to the iPad. Unlike previous tablet attempts, like the Galaxy Tab, with Android, this OS is finally built and designed for the tablet user experience, rather than be scaled up from a smartphone OS: “The Xoom is an Android tablet, not an overgrown phone,” according to CrunchGear‘s reviewer.

It is the closest anyone has come to an iPad equivalent for the Android set. I was impressed with the speed, design, and quality of the device, and although there are a few caveats, I came away optimistic for the new crop of Honeycomb devices that will follow this one.

Now, for the bad. The site was concerned about compatibility of apps as there aren’t many–if any–apps at this time that’s been re-tooled for the tablet OS. Rather, most apps available on Android Market will be scaled to fit the device’s large screen, but won’t have the user experience of a large tablet.

The Xoom also isn’t yet for business users. I’d be concerned about Flash support as well as potential app incompatibility or instability.

Another issue of concern from that site is price–at $800 for a 3G, upgradeable for free to 4G LTE at a later date, contract-free tablet, the Xoom is a pricey device:

Often seen as reviewer who is pro-Apple, Mossberg’s positive comments at Google’s Android 3.0 and Motorola’s Xoom tablet seem to mark a great start for the infant tablet OS that powers the 10-inch iPad rival. Like other reviewers, though, Mossberg both praised the tablet while knocking off points in certain areas, perhaps due to Google’s inexperience with the tablet OS as this is the first device and the first iteration of Android that’s been built natively for the larger screen: “Both Motorola’s hardware and Google’s new software are impressive and, after testing it for about a week, I believe the Xoom beats the first-generation iPad in certain respects, though it lags in others.”

The iPad has way more tablet-specific apps—around 60,000 versus a handful—and, in my tests, much better battery life… Unfortunately for consumers looking for iPad alternatives, the Xoom has an Achilles’ heel: price.

The Xoom, while being compatible in both portrait and landscape mode, is mainly designed as a landscape-oriented system, especially when you consider the front-facing camera’s placement. While the screen size is the same as the iPad, it is a bit more narrow and a bit more long–Motorola opted for a 16:9 aspect ratio to optimize the display for video viewing. This makes the tablet longer and heavier to hold in portrait mode:

I found it generally comfortable to hold, except when I was reading for long periods in vertical mode, where the long, thin shape and weight made it feel a bit unbalanced.

Mossberg seems to like the OS and UI, despite some of the described growing pains of a first-generation OS design. That said, he was disappointed that Adobe Flash 10.2 Mobile won’t be available at the device’s launch, though Adobe and Google will push out the browser plug-in at a later date post-launch.

Overall? “The Xoom and Honeycomb are a promising pair that should give the iPad its stiffest competition. But price will be an obstacle, and Apple isn’t standing still.”

Engadget’s detailed review seems to echo the same sentiments as those found on AllThingsD and MobileCrunch. Other issues that Engadget brought up deals with the speaker being muffled, the odd placement of the power button and the fact that the button sometimes got stuck, and the top-heavy weight of the tablet, especially when held in portrait mode.

On the software side, Engadget complains of the lack of availability of tablet-optimized apps, though I guess those will come soon as a plethora of Android 3.0 Honeycomb tablets are expected to join the Xoom on the market. Additionally, the site says that some of the software efforts behind the Xoom feel unfinished: “One other big note: a lot of the new software feels like it isn’t quite out of beta (surprise surprise). We had our fair share of force closes and bizarre freezes, particularly in the Market app and Movie Studio. Most applications were fine, but there definitely some moments where we felt like the whole device was teetering on the brink of a total crash.”

Despite some of these issues, Engadget seems to like the Xoom, but the site wonders, “the problem with the Xoom isn’t really about the core of the experience or the core of the hardware — it’s about the details. Too much in both the design (like those wonky buttons) or the software (like the feeling that this is all very much in beta) makes you wonder if this wasn’t rushed out to market in order to beat the next wave from Apple.”

There are also additional reviews from CNET, MSNBC, and BGR.