With Android Ice Cream Sandwich being the first version of the Android operating system that melds together’s Google’s smartphone edition and tablet edition (previously limited to Android 3.x Honeycomb) of the mobile OS together, we’re seeing the lines between phone and tablet being blurred.

With the traditional phone-centric build of targeted at finger-friendly mobility highlighting large areas on the display for users to touch and tablets representing a desktop-like build with multi-panes that add additional user functionality to a larger tablet-sized display, it looks like Android 4.0 Ice Cream Sandwich can juggle both adequately well at the same time. As such, with Motorola’s latest Webtop OS add-on to its smartphones, the smartphone-maker has decided to dump the custom Linux OS in favor of more Ice Cream Sandwich. 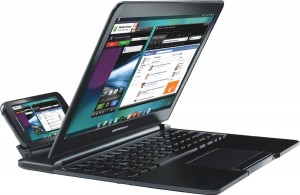 For those who may not be familiar with Webtop OS, it is a secondary OS that’s preloaded to run alongside the Android operating system and was first debuted by Motorola on the AT&T Atrix 4G and has since expanded to newer Android offerings from the company. When attached to a compatible accessory or dock–such as Motorola’s Lapdock–Webtop is activated on the bigger screen and you will never see it on your Android phone screen. It brings the ability to have a full Firefox browser with support for Adobe Flash and allows you to control and manipulate your Android smartphone in a window on the Webtop desktop.

The new version of Webtop abandons all that. Now, like Asus’s Padfone concept, when your Motorola smartphone is docked, according to Android and Me, it will display a tablet version of Android Ice Cream Sandwich, giving users a richer desktop-like experience when docked and still allowing them to have a mobile experience with Android while on the go and not docked.

In the early builds of Webtop, we noticed that performance was sluggish and there were no apps that took advantage of the larger display of the Lapdock or an HDTV when connected via a compatible dock or accessory. Sluggish performance is due to the fact that your phone’s dual-core CPU has to fire up both the Android OS as well as the Linux-based Webtop OS at the same time, taxing the processor and GPU. As such, Webtop’s usefulness was confined mainly to web browsing, negating many of its proposed benefits. Users can run, for example, an Office app on their smartphone, which would get blown up to the 11-inch display of a Lapdock or your 65-inch HDTV at home, lending to a pixelated experience.

The new edition of Webtop is something that we’ve explored with in the past with rumors surrounding Android 5.0 Jelly Bean. Apps can scale to the desktop version on the go as needed and users won’t need to have separate smartphone and tablet apps. With just one underlying OS on Webtop, hopefully performance will be snappier as the proprietary Linux OS has been abandoned. Also gone is the desktop version of the Firefox browser, and Webtop now opts instead to go solo with Motorola’s smartphone browser.

Hopefully, with the new Webtop, apps can scale without appearing pixelated in the ‘tablet’ or ‘desktop’ mode when docked. Does the new modular Android-powered notebook concept with wireless mobile broadband pique your interest now?

The new version of the Webtop OS was discovered on a leaked build of Android 4.0 Ice Cream Sandwich that is scheduled to be pushed out to the Motorola Droid RAZR and RAZR Maxx soon for Verizon Wireless.