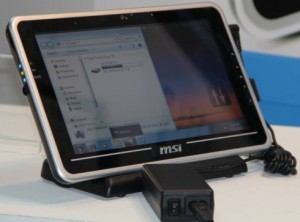 According to a DigiTimes report, MSI may be launching its Windows-based WindPad tablet in January or February, ahead of plans for the company’s Android-based tablets that are slated for an April or May launch. Unlike the Android tablet models, the Windows WindPad from MSI will favor Intel’s Atom-based Oak Trail processor over an ARM-based CPU.

In addition to the 10-inch Windows WindPad model, MSi is said to also be demoing other tablet products in early January at the Consumer Electronics Show in Las Vegas.

Because of the growth of the tablet market, which has attracted a number of competitors, MSI is said to be taking an aggressive pricing approach in regards to the tablet.