Google has yet to announce Android 4.1 Jelly Bean, its features or its release date and I already have a love/hate relationship with it.

The company is widely expected to announced its next version of mobile software at next week’s Google I/O. That piece of software is rumored to be called Android 4.1 Ice Cream Sandwich. The full list of features that will be coming to devices along with Android 4.1 Jelly Bean is currently unknown.

Its release date, which could be soon after its announcement, has yet to be revealed.

And yet, I already have strong opinions about the software that will apparently follow-up Google’s Android 4.0 Ice Cream Sandwich which was announced and released in December of 2011.

I can't decide if I love or hate Android 4.1 Jelly Bean.

Problem is, I can’t decide whether I am going to love or hate Android 4.1 Jelly Bean.

Let me break down what has gone through my head ever since I found out that Google might actually be releasing Android 4.1 at some point in the near future instead of with the next Nexus. 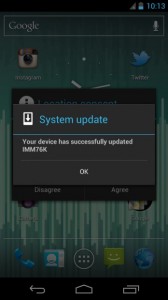 Why I Love Android 4.1 Jelly Bean

1. It’s going to bring new features and likely, some bug fixes as well: Every major Android update always brings something new and exciting to the table and I have no doubt that Android Jelly Bean is going to do that as well. What exactly remains to be seen but Android owners can rest assured that Google has some nifty features up its sleeve. And while Ice Cream Sandwich is a fantastic piece of software, there is definitely room for improvement and I expect Google will toss in some fixes and enhancements of current features as well.

2. I own a Nexus device: Google is apparently planning to make the HSPA+ Galaxy Nexus the first device with Android 4.1 Jelly Bean. How do I know this? Google accidentally leaked that information out. However, I assume that the 4G LTE Galaxy Nexus, you know the one on Verizon that saw its first update five months after launch, won’t be too far behind it which means that I should get Android 4.1 before most people.

3. It might come with a new Nexus tablet: I recently bought an iPad 3. It wasn’t cheap. But as much as I hate to say it, I am interested in a Nexus tablet, especially one running new Android software on a 7-inch display with a price point thought to be $199 or less. The thought of a Nexus tablet coming with some killer tablet features in Android 4.1 Jelly Bean intrigues me. A lot.

Why I Hate Android 4.1 Jelly Bean

1. Android 4.0 Ice Cream Sandwich is still rolling out for crying out loud: Only a small fraction of Android devices have received the upgrade to Android 4.0 Ice Cream Sandwich thus far. The update, which was released back in December, has been slow to roll out, especially to devices on American carriers. Phones like the Motorola Droid Bionic, Samsung Galaxy Note and HTC ThunderBolt are still without the update. Rolling it out this soon could cause confusion amongst Android users and alienate them even more than ICS has.  I don’t think anyone wants to keep track of two separate updates rolling out at exactly the same time.

2. I live in America: American carriers are notoriously slow in getting major Android updates pushed to their devices. What this means is that I could be waiting for quite a while before Verizon updates my Samsung Galaxy Nexus which means that those of you who own a non-Nexus smartphone, like the Motorola Droid RAZR or Droid RAZR MAXX for instance, could be waiting quite awhile for an update to arrive.

3. If Android 4.1 is coming soon, what’s arriving on the next Nexus smartphone?: Earlier this week, we saw Google accidentally leak word that the HSPA+ would be the first phone to Android 4.1 Jelly Bean. Google releases a new Nexus smartphone every year and that phone is generally running a new piece of software, just like Apple’s iPhone generally launches with the new iOS version. This could mean that we might see another version of Android, possibly Android 5.0, arrive later on this year.

I guess I’ll find out how I really feel once Google I/O kicks off next week.

How are you Android users feeling about Android 4.1 Jelly Bean and the prospects of it coming out soon?