Last month, I had the good fortune to have tested two slates, the HTC Flyer and Fujitsu Stylistic Q550, with pen + touch digitizers from the same vendor: N-Trig. Due to software and design choices, the experiences of both were quite different, but I tried to look past that to get a feel for the digitizer itself and compare that to the Wacom digitizers I’ve been using. Here’s my takeaway. 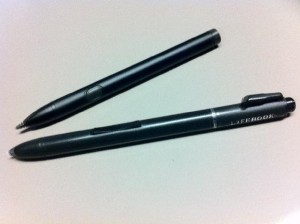 What struck me immediately was the similarity in the feel of the two digitizers. There are stark differences in the external hardware, but I did not find myself noticing major differences in the accuracy or smoothness. The ink on the HTC Flyer was obviously much more jagged, but I attribute that to software and other factors. There was also a lag between the hovering pen and cursor movement on the Fujitsu Q550, but tapping and inking were fine.

What differences I did note were slightly decreased range of pen detection and more responsive touch from N-Trig. I can’t quantify either of these, but I had to hold the pen just a hair closer to the N-Trig slates than I normally did in order to turn off touch detection. Possibly it was just slower to react. On the flip side, I found it more reliable when it came to recognizing two-finger touch. With Wacom, I find I have to be more precise with two-finger contact. This might also be due to reaction time. Those subtle differences aside, I found the underlying technologies to be quite comparable in their performance.

And now we get to the hard differences. The N-Trig pens currently being offered are perfectly smooth and cylindrical. A round shape is hardly unusual for a pen, but the complete roundness makes storage tricky. Neither the Flyer nor the Q550 had holding slots for the pen. Chris Lucksted has found the pen silo on the Motion CL900 to be a “bit frustrating”, which I attribute to their attempt to accommodate the design of the pen. A perfectly round pen simply will not work for the pop-out or pull-out silos that have been common on Wacom Penabled Tablet PCs.

The design does not lend itself to usage either. The flush-mounted side buttons were tricky to find by touch, a feat made more challenging by the tendency of the pen to slide and turn. Most Wacom pens I’ve used have a side button that protrudes and/or a tab or clip near the top, some asymmetrical feature that made it possible to orient the pen. A completely round design makes no sense to me, especially since N-Trig’s digital “pencils” have a hexagonal shape, a shape that has worked pretty well for people over the years.

Perhaps the most important distinction here is that Wacom pens are almost always custom designed for the individual manufacturer, while the current generation of N-Trig pens are highly standardized. There are some differences: the Flyer pen had two side buttons, while the Q550 pen had a slot on the end for a tether. But the basic design was the same. By contrast, I’ve used more than half a dozen different Wacom pens, all with different feels, some better than others. I’ve never been stuck with a pen design I didn’t like. 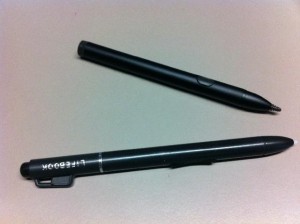 Another difference is the construction material. The N-Trig pen shafts were metal, while Wacom must be plastic. Metal, of course, has the advantage in strength. In addition, the smooth bottom tip of the Flyer’s pen made it suitable for use as a capacitive stylus, allowing it to access both the pen and touch features. I don’t know if some technology limitation requires the current N-Trig pens to be made of metal, but I do know Wacom pens cannot be made of metal. Metal blocks the signal between a Wacom digtizer and the pen. Wrap a piece of foil slightly above the tip of your Wacom pen to see for yourself.

The pen tips are very different. The N-Trig tips were hard with loose springiness. They can be pulled and pushed to see how much give they have. They also clack against the shaft of the pen to contribute to that noisiness that many people observe with them. On Wacom pens, the pull and push of the tip is almost imperceptible, while the impact of the pen tip is no louder than that of a standard ballpoint.

Finally, all the current N-Trig tablets are using battery-powered pens. This adds a bit of weight to the pen, but not much, and I preferred the heft over the feather-light Wacom pens. The AAAA battery supposedly lasts for thousands of hours, and though uncommon, it is a standard size. I spotted it at Rite-Aid and CVS, so no need to special order one when it runs out. N-Trig does make a digitizer that can work with a battery-free pen, but vendors don’t seem to be going for that. Wacom pens are always battery-free and last for years.

As I noted above, N-Trig seems to have a slight edge over Wacom with touch responsiveness. This makes sense. Wacom has been in the pen computing industry for years and only recently added touch input to their offerings. N-Trig, however, has always offered pen + touch input, starting with the Motion Computing LE1700.

N-Trig offers four-finger input, which means up to four points of contact can be tracked, which can be demonstrated by dragging four fingers across a drawing program. Wacom is limited to two-finger input, but recently added five-finger gesture recognition. This means it can recognize when there are up to five points of contact to trigger gestures, but only track two points at a time. In practice, these differences don’t matter much. Few people will draw with four fingers and most gesture control is limited to two-finger.

Troubles past and present

Of course, no technology is perfect and neither N-Trig nor Wacom dual digitizers are free of flaws. Just last year, GBM founder Rob Bushway called for a recall of the Dell Latitude XT for issues related to the N-Trig digitizer. He was far from alone in his complaints.

But that was last year. This year, Rob is admitting to becoming more of an N-Trig fan and the issues of the past seem to have stayed there. That’s not to say, however, there aren’t new issues.

Chris Lucksted had to return his Motion CL900 for a pen-related digitizer problem. There was also that problem I had with the pen for the HTC Flyer getting stuck in the “on” position, which I fixed by removing and re-inserting the battery. These are a far cry from the problems of the past, but it’s not trouble-free yet.

In a reversal you old timers will find ironic, I’ve noticed Wacom dual digitizers suffer from the “gridding” issue that formerly was a problem for N-Trig. It’s subtle, but under bright light and held at an angle, a grid of dots can be seen on the screen of a tablet with Wacom dual digitizer. The old N-Trig digitizer had a similar issue. If the new ones have that problem, I couldn’t see it and I was definitely in bright light with them. Honestly though, it’s not something that should bother anyone, just a difference I noticed.

Is there a winner?

N-Trig is the new guy in this battle. They burst on the scene with pen + touch years before Wacom offered a dual digitizer and maintain an edge on the touch front, which is the more sought-after feature in today’s market. But their pen technology isn’t as mature as Wacom’s. They got trashed early on in that area and still haven’t quite caught up but hav come back fighting. As their progress has shown, I believe they will continue to improve.

Furthermore, by not to competing on 10″ and under dual digitizers, Wacom is letting N-Trig go unopposed in a burgeoning area of the market. N-Trig’s technology really only needs to be comparable in order for them to stay in this fight, and that gives them a real chance to get ahead overall. This fight is far from over.

That said, if we’re looking strictly at the technology and scoring this fight on points, Wacom is in the lead, but it’s far from a knockout victory. The two technologies are comparable enough that I am comfortable recommending either, and the differences small (or geeky) enough that many won’t care. A lot of it is just a matter of taste. The N-Trig or Wacom question is still valid when evaluating Tablet PCs, but it’s a lot lower on my list of priorities.

Of course, everyone has their own list of priorities. What do you think? Is it an even enough game now? Is the digitizer still a make-or-break feature for you? Or do you not care as long as you get active pen input?