November is National Novel Writing Month, an annual event wherein writers around the world come together to write a 50,000 word novel in just 30 days. I’ve done this once before, and since I’m under deadline with my latest work in progress, I decided to join in the fun again this year.

To write a novel in a month you need determination, fingers that fly like the wind and, of course, the right tech. All month long I’ll be blogging about the best tools for writers from gadgets to software and apps.

Those of you out there who’ve never done NaNo might wonder how it’s possible to write so many words in this timeframe. Partly it’s a willingness to just write and write without thinking, but I find that achieving daily wordcount is much easier when I put more of my downtime to good use. 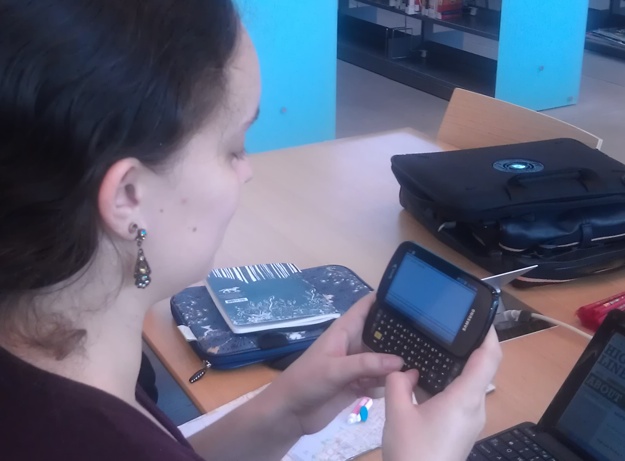 If I can write while riding the train, waiting in the doctor’s office, or while taking my lunch break, it gets a little easier to hit my goals.

For me, the best way to do this is on a smartphone. It’s always with me, has Internet access in case I need it, and I can either write in a blank file or pull down the latest copy of my work in progress from SugarSync. But in order to write fast and accurately, I need to have a physical keyboard.

My device of choice right now is the original Samsung Epic 4G for Sprint. I like the keyboard on this one because it has wide keys with plenty of space between them, so hitting the wrong key doesn’t happen often. The keys are flat but not too slick, so my fingernails don’t slide off. There’s a dedicated number row so I don’t have to press an extra button to get at them. And though a little stiff, the keys are easy to press so I can type fairly fast.

I can’t type as fast here as I can on a computer of course, but I can usually keep up with my thoughts and wordflow well enough for the short time I’m using it.

The Epic 4G isn’t the only great smartphone keyboard out there. There’s at least one good choice on all of the major carriers.

Verizon Wireless customers should check out the Samsung Stratosphere, which is essentially the same as the Epic 4G except with a less stiff keyboard. It has a nice large screen like the Epic and runs on Verizon’s 4G LTE network for very speedy Internet.

The T-Mobile Sidekick 4G might have been designed for teens who can’t stop texting, but that means it has to have a kickass keyboard. This new version runs on Android, so you can be one of the cool kids.

Unfortunately, there don’t seem to be any decent phones with keyboards on AT&T. Though if I were to suggest anything, the iPhone’s on-screen keyboard is one of the better ones I’ve used and, in landscape mode, will do in a pinch.

Are you participating in NaNoWriMo this year? If so, what do you use to write when you’re on the go?