One of the most anticipated and visually stunning games for consoles this year is without a doubt NBA 2K16. It was released back on September 29th and has been extremely popular ever since. Die-hard gamers that want to keep the court action going on mobile devices will be happy to know the official NBA 2K16 Mobile Game for iPhone and Android was just released for $7.99, and below are all the details.

Just a few days after NBA 2K16 was released for millions of fans to enjoy 2K games released an app called “My NBA 2K16” for Android and iPhone, but this was just a companion app for the game. Essentially allowing gamers to save player cards, use virtual currency and other things for the console game. Now though, you can play the actual game right on your smartphone, and this year includes career mode.

NBA 2K16 Mobile offers stunning graphics and many of the same gameplay options as the full-blown game, but obviously scaled down for smartphones and tablets. Mainly the MyCareer, Blacktop, and full season modes are all included. It’s one of the better looking games for a smartphone or tablet, but it will cost true players more than a few dollars.

According to the official Google Play Store and iTunes App Store listing for NBA 2K16 for Mobile, the game is much-improved and should be a rather impressive mobile experience. It specifically mentions stunningly smooth and improved graphics, better performance, and more importantly redesigned controls for easier gameplay. We really like the dual analog style controls, but there’s no controller support.

Of course with NBA 2K16 Mobile many of the same popular options from consoles has carried over, which many will be happy to hear. The in-game VC (Virtual Currency) and player cards are included, as well tie-ins with the My NBA companion app we mentioned above. Not to mention the Blacktop mode and a pretty awesome soundtrack to go with it. Here’s a breakdown of what to expect.

Above we mentioned the NBA 2K16 store for mobile offers additional stuff, and it does, but at an additional charge. The game itself is $7.99, which isn’t bad considering how impressive the graphics and gameplay are, but in order to add more courts or get additional content there are in-app purchases.

So far our initial impressions are very favorable. The graphics and gameplay is much better than last year, and those fade-away jump shots look awesome on my Galaxy Note 5. There are a few odd quirks that users will need to get used to in terms of the control layout, and some devices like the SHIELD or Nexus 6 are listed as incompatible, but will most likely be added and fixed in the near future. 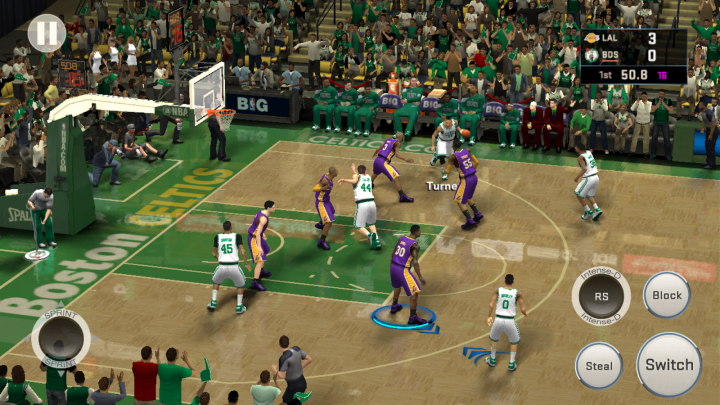 It’s also worth noting that NBA 2K16 is a massive game, taking up 1.9GB of storage just for the initial download, with more space being used as gamers add addition content, courts and more. Users should download and install it with a WiFi connection and be sure there’s enough storage on your device, as it will end up taking more than 2GB of space all said and done.

That all aside, it’s one of the best looking games around, and possibly the best NBA experience available for Android or iPhone. There’s another option from EA sports, but NBA 2K has consistently released awesome games for mobile. More than just roster changes. Give it a try today with the links provided below.