Back in May of 2010, Google took the stage at Google I/O and announced a new mobile operating system for its Android platform called Android 2.2 Froyo. And then, in June of 2010, the Nexus One became the first Android smartphone to receive the update. Fast forward all the way to present day, February 2012, and rather surprisingly, the Android 2.2 Froyo update is still rolling out to devices.

Today, a device called the Samsung Continuum, an Android smartphone on Verizon, received its upgrade from Android 2.1 Eclair to Android 2.2.2 Froyo. 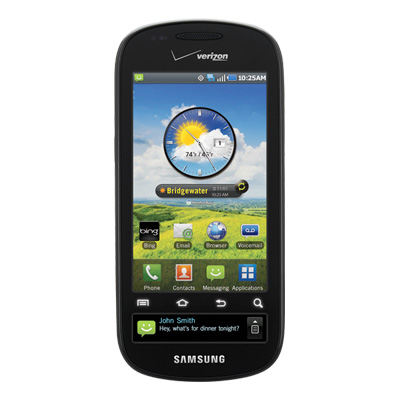 It never took off with the masses and the Continuum was soon a forgotten piece of Android lore.

Verizon though has dusted off the device and has seen it fit to bring it up to Android 2.2.2 Froyo. The update is now rolling out and it comes with a ton of enhancements on board.

+ This software update is the first step of two when upgrading to Android 2.2 (Froyo).
Downloading this update will also provide improvements in the Over the Air (OTA)
User Interface.

+ Improvements in Over the Air (OTA) functionality to ensure your device
can be successfully updated.
+ Ability to allow automatic application updates in Android Market.™
+ When using V CAST Apps to download applications, the device will remain
active to ensure transfer completion.
+ Media Hub now comes preloaded.
+ Improved GPS accuracy when using the VZ Navigator® application.
+ Enable the auto-refresh setting within the Weatherbug® App to
ensure constant updates.
+ Accurately display the time when using the Weatherbug App.
+ Easily toggle audio between a connected headset and the phone during Visual Voice Mail playback.
+ Selecting Voice Mail from within the Buddies Now widget will properly open the
message in the Visual Voice Mail application.
+ Visual Voice Mail displays correct call back number.
+ Successfully open the Navigation Link from within the car dock screen.
+ Enhanced stability while playing streamed music using the Google Music application.
+ Launcher application will no longer experience forced closures when the device is placed in desk mount.

At this point, we’re conflicted. While it’s nice that Verizon has finally updated this phone after all this time, we can’t help but feel perplexed about the fact that Android 2.2 is still rolling out to devices.

It makes you wonder.

Will it be two years before a device with Android 2.3 on board sees its upgrade to Android 4.0 Ice Cream Sandwich?