This week Google announced a large collection of changes designed to get Android devices running the latest software and to make the Android market an easier to navigate. Today, to round out the week of Android, Netflix finally released an Android app.

As soon as the news hit Twitter, Facebook and offices across the country, a large number of users quickly went to the market on their new phones like the HTC ThunderBolt, Droid Incredible 2, Motorola Atrix 4G and the LG G2x only to find out that their phones don’t work with the Netflix app. In fact, only one of our Top 5 Android smartphones will work with Netflix and as of right now none of the Top Upcoming Android phones for this summer are supported. 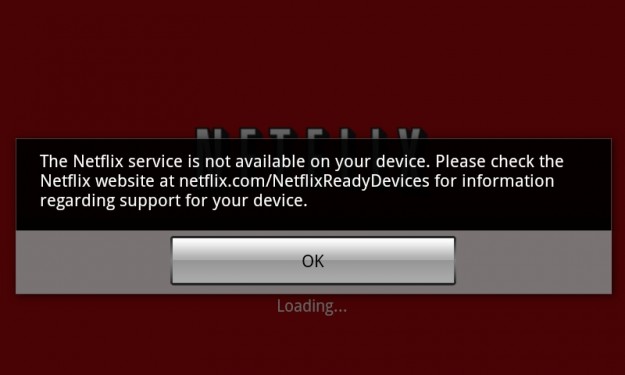 Netflix on the HTC ThunderBolt

As it turns out, the Netflix app only works with the older devices like the original Droid Incredible, Evo 4G, Nexus One, G2, and Nexus S. Most of these devices were released so long ago that owners are almost ready to upgrade to a new phone, but doing so will result in a loss of Netflix. Losing access to a new app when you upgrade to the latest device? Crazy, but true. Even crazier, the HTC ThunderBolt is incredibly similar to the EVO 4G in terms of specs, but it can’t watch Netflix Instantly.

The problem isn’t that Netflix want’s to play favorites, but rather that Google still hasn’t been able to offer a standard streaming video application. Instead Netflix has to test and develop for every single Android device on the market. As you can expect this is a slow process which means early adopters, and practically anyone who has purchased a phone released in 2011 can’t use the Netflix Android app.

The Android platform is gaining rapid adoption in the mobile world and presents a great opportunity to reach more of our members. Because the platform has evolved so rapidly, there are some significant challenges associated with developing a streaming video application for this ecosystem. One of these challenges is the lack of standard streaming playback features that the Netflix application can use to gain broad penetration across all available Android phones. In the absence of standardization, we have to test each individual handset and launch only on those that can support playback. We are aggressively qualifying phones and look forward to expanding the list of phones on which the Netflix app will be supported. We anticipate that many of these technical challenges will be resolved in the coming months and that we will be able to provide a Netflix application that will work on a large majority of Android phones. – Roma De Product Team at Netflix

Google has just launched Google Movies, which offers movie  rentals on Android devices running Android 2.2 or higher. These movie rentals are available on Android phones and Tablets, and here’s the kicker, as streaming rentals. That’s right. Netflix on Android works on old phones, but not on the latest devices. Either Google is oblivious to consumer desires to use Netflix on their smartphones or Google wants to make a bunch of money on movie rentals like their rival Apple.

As an Android user, I appreciate the fact that Netflix has arrived and that Google is taking steps to deal with fragmentation, but issues like this highlight how far Android has to go. Not having a standard way to securely stream video was OK when Android launched and annoying in 2010, but in the middle of 2011 it’s downright unacceptable. In no way should the latest and greatest phones, especially those with fast 4G, be left off the list of Netflix supported devices because Google can’t be bothered to build a standard streaming service.

Perhaps someone can make that their 20% project so that we can actually use our Android smartphones to watch movies or TV shows without feeling like we are using a Windows Mobile 6.1 device.

Update: Clarification, the lack of a streaming video application referenced is directly relating to the ability to stream DRM protected video content.