Amazon’s new Fire HDX 8.9 offers faster specs, better sound and an improved display. Starting at $379, the Fire HDX 8.9 is available for pre-order today at Amazon.com for $379.

Amazon is attempting to position the Fire HDX 8.9 against the iPad Air, Apple’s uber-popular tablet and what’s essentially the default tablet for consumers and businesses alike. Whether or not the Fire HDX 8.9 is a better choice than the iPad Air completely depends on users’ needs. Those immersed in Amazon services such as [easyazon_link asin=”B00EW0FYA0″ locale=”US” new_window=”default” nofollow=”default” tag=”gbm-ea-20″ add_to_cart=”default” cloaking=”default” localization=”default” popups=”default”]Amazon Prime (One Year Membership)[/easyazon_link] and Kindle Unlimited. 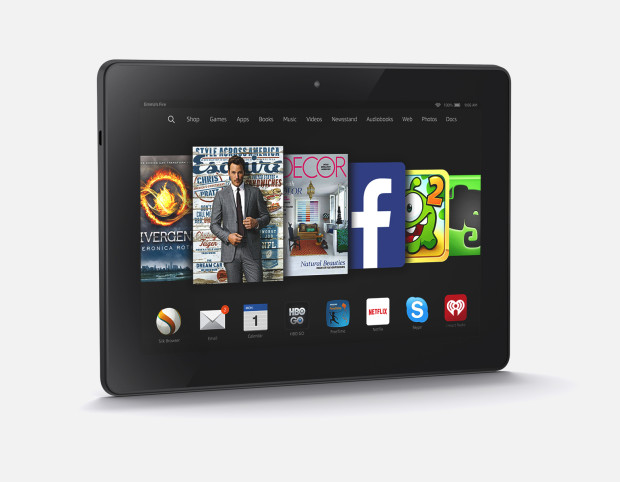 The tablet runs on a heavily customized version of Android that Amazon calls Fire OS 4.0. There are countless Android tablets on the market,  but Amazon tries to differentiate its tablets by tying in its media offerings and focusing on customer experience. The user interface is simplified and really focuses on content consumption. The Fire HDX comes with MayDay complimentary live video support

As far as speed goes, Amazon claims the Fire HDX 8.9 runs on a 2.5GHz processor and a graphics engine that is 70% faster than previous Amazon tablets. This matters most to people that play a lot of games on their devices.

The Fire HDX 8.9 isn’t all about play. Amazon is offering a $59.99 Fire Keyboard accessory for productivity. It weighs about seven ounces and will help at least some users from reaching for their laptops.