While Archos has been making a number of portable media players–tablets and music listening devices–that run on the Android operating system, none of those systems released to date come with mobile broadband 3G access, placing Archos at a disadvantage against players like Samsung’s Galaxy Tab and Motorola’s Xoom Honeycomb tablets. That’s about to change as Archos is set to introduce some new dual-core tablet models with 3G functionality come this summer. 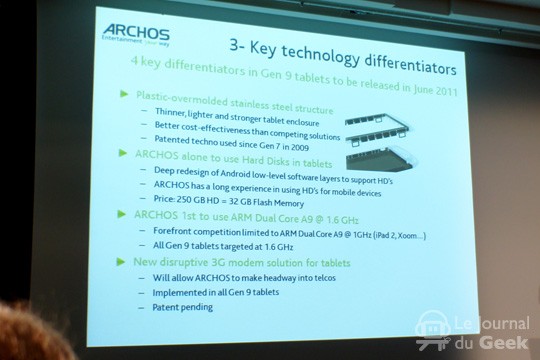 The new tablets will sport an ARM Cortex A9 chipset reference design with a dual-core CPU clocking in at 1.6 GHz. The tablets will have either HDD or solid state configurations with up to a 250 GB hard drive or 32 GB SSD, and Archos is touting a “new disruptive 3G modem” for entry into the carrier market.

Design-wise, Archos is saying that its tablet will be encased in a “thinner, lighter, and stronger enclosure.”

In the past, Archos has supported its tablets’ copious amounts of on-board storage with various video and audio codecs so that most types of songs and videos could be playable and viewable on its tablets as a differentiating factor from rivals.