It appears that a new smartphone and cloud service might not be the only new things announced at Samsung’s upcoming Galaxy S III event as a new rumor has the company unveiling a new Galaxy tablet on May 3rd as well.

According to source of CNET, Samsung might be gearing up to launch a new 10.1-inch version of its Galaxy Tab. It supposedly is a different device than the Galaxy Tab 10.1, a device the company announced earlier this year, and it’s said to have a dual-core processor on board.

Other than the screen size and the processor, the device remains shrouded in mystery. 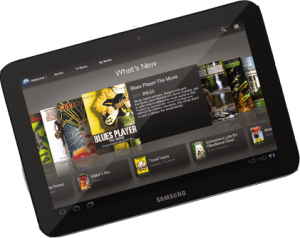 The Galaxy Tab 2 may see some in-house competition.

The timing of the launch is a bit odd considering the company has yet to launch the Galaxy Tab 2 10.1, a device that has been reportedly delayed because Samsung wants to equip it with a quad-core processor instead of the dual-core chip that was on board when it was first announced.

Samsung is scheduled to announce its next version in its Galaxy series of smartphones on May 3rd. Earlier today, a device thought to be the Galaxy S III leaked out on video ahead of the announcement.

In addition to the phone, Samsung is also rumored to be unveiling a cloud service competitor to Apple’s iCloud.

The service, called S-Cloud, will evidentally let users sync data between phones and store their files in the cloud. However, unlike iCloud, the service will apparently put no constraints on the types of content that can be stored within the cloud.

May 3rd is shaping up to be quite a big day for Samsung.