The new version of Google Maps is now available for Android smartphones and tablets, bringing some of the new features for the desktop version to mobile devices.

The new Google Maps for Android is now available as a free update in the Google Play Store for any user with an Android device. The update should also come to the iOS App Store sometime in the near future, though it’s not clear exactly when the iOS version will arrive. The new update includes better navigation, a new explore function and a new tablet design.

Those who use their Android device as a GPS while driving will appreciate the new features that give users alternate routes around traffic, similar to Waze. The maps will show any problems that occur on the road, and automatically reroute users as new and faster routes open up to them.

The new Google Maps also includes a new exploration feature which lets users discover news places without typing anything. The mode lets users choose what type of place they want to visit, and the app will populate a list of choices for them. Like the desktop Google Maps, the Android app will use the user’s Google+ friends along with Zagat ratings to suggest the best places to go. 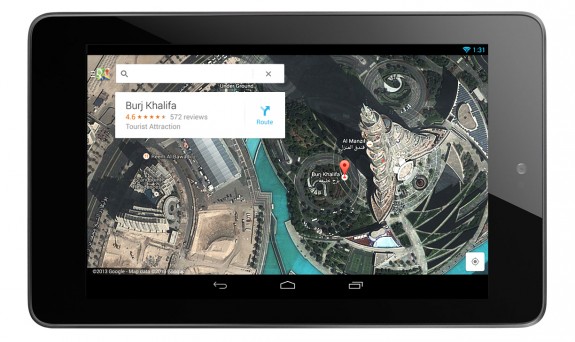 Finally, the new Google Maps brings the layout of the new desktop version to Android tablets. The new layout shows more map tiles on screen at once with menu and search boxes floating on top of the tiles. The layout looks similar to the iPhone Google Maps app made to fit a larger screen.