Three interesting iPhone 6 release details arrived this week, shedding more light on what consumers can expect from Apple in September.

New photos show something special that may be in the iPhone 6 box, Sapphire display details continue to shift and there is more talk of two iPhone 6 models planned for release this fall.

As we inch closer to the one month count down to a rumored iPhone 6 release date, small details continue to come into focus and with an Apple event rumored in less than a month we’ll see more information come out each day.

So far it sounds like the event will focus on the iPhone 6 and iPhone 6 release, and not on any new iPads or an iWatch. Both of these devices may come later at an event in October. 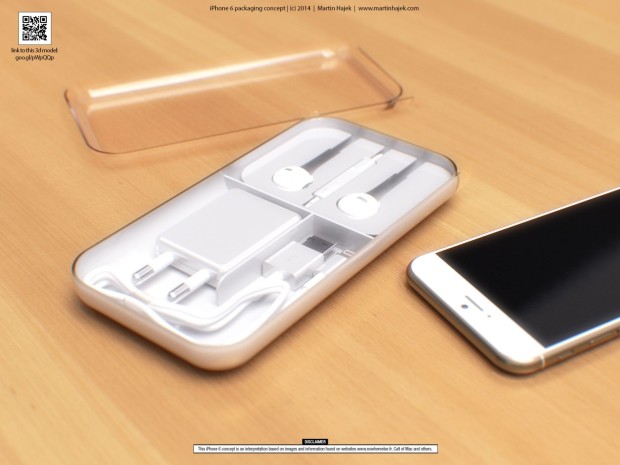 We could see a surprise in the box when the iPhone 6 release arrives. (Concept by Martin Hajek)

Read: 10 Things an iPhone 5s Owner Wants from the iPhone 6

During the next three to four weeks we’ll hear an avalanche of new iPhone 6 details including new iPhone 6 design photos, leaked iPhone 6 specs and other iPhone 6 release date information as well as the possibility of an iPhone 6 pre-order.

For now, we can share three interesting iPhone 6 release details that surfaced this week, and offer a bigger picture look at what we can expect from Apple in the coming weeks.

Surprise in the iPhone 6 Box

It’s tough telling if Apple is really ready to offer a new USB to lightning cable, but new photos show a look at a smarter, easier to use Lightning USB cable that can plug into a charger or a computer facing up or down.

Apple changed up the iPhone connection two years ago, offering a reversible connection to the iPhone, but the end that plugs into he computer still required the user to insert it correctly. Now a number of new photos from Nowhereelse.fr show what could be a reversible USB connector on a Lightning cable.

This could be a new reversible iPhone 6 USB cable.

This matches an Apple patent from earlier this year and if these photos are legit it seems very likely that this will ship with the iPhone 6, instead of the standard Lightning cable.

The plastic block that normally occupies part of a USB cable connection is hollow here and contacts are on each side so users can plug this in, in either direction.

One of the biggest attention grabbing details about the new iPhone is the rumor of a super-strong Sapphire display that you cannot scratch. The assumption was that Apple would add this new Sapphire display on the iPhone 6 4.7-inch and 5.5-inch models, but a new report suggests the company may only offer it on higher-end models that cost more.

The Wall Street Journal reports, “Apple is considering using sapphire screens in more expensive models of the two new, larger iPhones it plans to debut this fall, if it can get enough of the material,” following up with the possibility that Apple will charge a premium for Sapphire screens that one analyst predicts cost Apple five times more than a Gorilla Glass screen cover.

Although this is a possibility, Apple already charges a hefty premium for more storage, charging consumers $100 for an upgrade that raises their costs just $10. A scratch free display sounds wonderful, but are consumers really willing to pay that much more for it?

The Kyocera Brigadier is $99 on contract with a Sapphire Shield display that is very resilient.

Evidence is strong for an iPhone 6 release that includes a 4.7-inch and a 5.5-inch iPhone 6, but there is still some speculation about the timing of the largest model and a little concern about the lack of 5.5-inch iPhone 6 leaks that show the same amount of information and detail as we’ve seen on the 4.7-inch model.

According to the National Broadcasting and Telecommunications Commission in Thailand, Apple plans to sell two iPhone 6 models this year, with the models iPhone 6 A1586 and iPhone 6 A1524. Thia Rath reports that Takorn Tantasith, NBTC Secretary, revealed the details in a tweet.

The message confirms that the iPhone 6 can be sold in Thailand. The report claims Apple is not happy that the individual shared the details which the company considers private.

We expect two iPhone 6 models with larger screens and a faster Apple A8 processor this year. Leaks show a new iPhone 6 design with more metal and more curves. You can see how the iPhone 6 compares to the iPhone 5 in the video above. Apple will reportedly hold an iPhone 6 event on September 9th, which hints at an iPhone 6 release date as soon as September 19th.