A leaked document obtained by Android Central reveals some important dates for some highly coveted device launches on Verizon Wireless, which includes the Thunderbolt, a 4G LTE smartphone, 2 mobile hotspot routers compatible with the carrier’s 4G network, and a Windows Phone 7 device made by HTC.

According to the document, the HTC Thunderbolt is slated to launch on March 17th, days before the CTIA Wireless conference is slated to commence on the 22nd of the month. 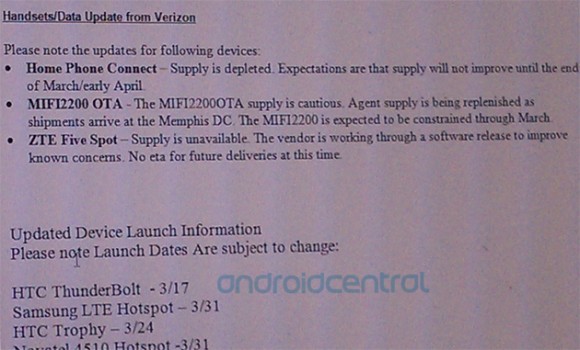 The Windows Phone 7 HTC Trophy is hitting Verizon Wireless on March 24th. Rival Sprint is offering the HTC 7 Pro on its Now Network as the HTC Arrive. These two devices will be among the first CDMA-based Windows Phone 7 devices as Microsoft had chosen to focus its OS on GSM networks when it debuted the platform late last year.

There are two mobile broadband routers slated for launch on Verizon, one by Samsung and the other by Novatel, both launching on the same day at the end of the month on March 31st. The Samsung LTE Hotspot, which will support the carrier’s 4G LTE network, along with the Novatel 4510 3G/4G MiFi routers will allow users to connect WiFi-enabled devices to the router to share the network’s 4G data connection without requiring a separate data plan for each device.

With its 4G network, which is supported by the Samsung router, Novatel MiFi router, and the HTC Thunderbolt in this launch leak, Verizon is claiming that speeds will be 10 times that of 3G speeds. In usage, I have consistantly obtained speeds in excess of 10 Mbps on the download side and upload speeds for me were routinely between 3-5 Mbps. These speeds rivaled some fast DSL and slower U-Verse, FiOS, and cable modem connection speeds for comparison.