While it’s still up in the air if Verizon Wireless will carry Samsung’s third-generation flagship Galaxy smartphone in the form of the Galaxy S III–the U.S. carrier had opted to skip the Galaxy S II for its own Droid Charge and to be the first to launch the Galaxy Nexus in the U.S. market–it appears that things are warming up for Verizon and Samsung. A mid-range Samsung smartphone with a model number of SCH-i200 is rumored to be destined for Verizon’s 4G LTE network. 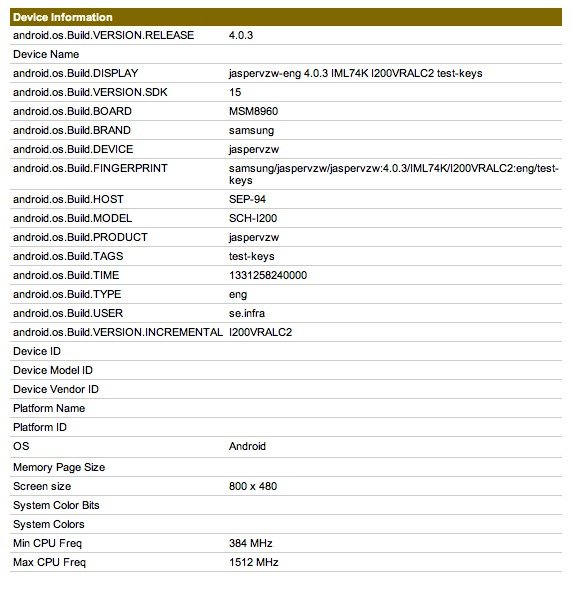 According to Droid-life and pocketnow, little is known about the Smasung SCH-i200 right now aside from the fact that it will be powered by Google’s Android operating system, use Qualcomm’s Snapdragon S4 dual-core CPU, and will have a display resolution that’s a paltry 480 X 800. Right now, it’s unclear if the screen will be of the favorable Super AMOLED Plus display, which gives you vibrant and often times hyper-saturated colors, but eschews the PenTile-based sub-pixel arrangement that the non-Plus model had leading to a better resolution display. If it does come with a Super AMOLED Plus display, the SCH-i200 could very well succeed the Droid Charge and be a good value in the mid-range smartphone lineup.

The phone will be released with Android 4.0 Ice Cream Sandwich and early GLBenchmarks results show a model name of ‘Jasper.’

Given that Qualcomm’s Snapdragon S4 processor in the U.S.-based version of the HTC One X for AT&T and the EVO 4G LTE for Sprint have been shown to perform favorably against NVIDIA’s quad-core Tegra 3 model, mid-range smartphones are packing in more power than they have in the past and the gap between mid-range and high-end now rests with screen resolution, with the latter category sporting at least a qHD display and going to as high a resolution as 720p.

Given that Verizon had said in the past that it will no longer release phones with 3G-only radio, 4G LTE is a safe bet on this model.