The Moga Pro Controller has the same button layout as the Xbox 360 controller. Unlike Samsung’s upcoming gamepad, however, the Moga Pro doesn’t try to completely emulate Microsoft’s controller, just most of it. The main differences between the two controllers are the added grip texture on the Moga Pro and its lack of colors aside from black and orange. 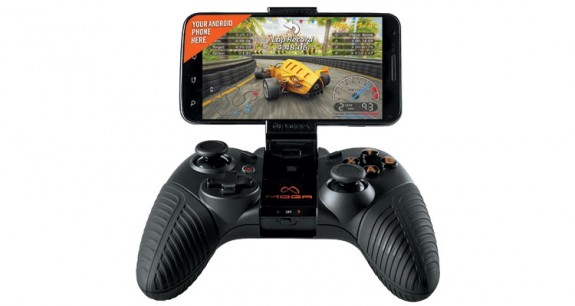 The controller syncs to Android devices wirelessly, but it also has a holster that can hold and Android smartphone of up to 3.2-inches wide. The holster lets games put their smartphone on top of their controller for easy portable gaming. Attaching a phone to the controller makes it look similar to the NVIDIA Project Shield without the device’s unique PC streaming feature.

Users with gigantic phones or Android tablets can set their device on a table using the included tablet stand. Users can also choose to hook their device up to an HDTV via an HDMI cable to emulate a console experience with the Moga Pro Controller.

The Moga Pro will work with a wide variety of games from several developers including Wild Blood,The Conduit HD, Grand Theft Auto: Vice City and the new ShadowGun: DeadZone. The Moga Pro will also ship with Gameloft’s N.O.V.A. 3 and Pac-Man from Namco.

Android gamers interested in the Moa Pro controller can buy it now from PowerA’s Moga website, Amazon.com or Walmart.com. The controller costs $49.99.