Though Google’s new mid-2013 Nexus 7 tablet isn’t slated to be available until July 30th, some retailers like Best Buy and GameStop are making the slate available to consumers as of today, Friday, July 26th, for purchase. And even though comments have been so far positive with the upgrades that Google has made given the low $230 price of entry for the Nexus 7, there are some questions about the device’s build quality.

In an exclusive report, Phone Arena states that one user had noted that his/her tablet had some severe deforms around the Nexus logo in the back. In an image posted on the site, Phone Arena noted that the “u” in the Nexus logo shows some warping. It’s unclear if the issue is related to heat–the site says that the tablet was charging–or if it was some other error or issue in the manufacturing process. 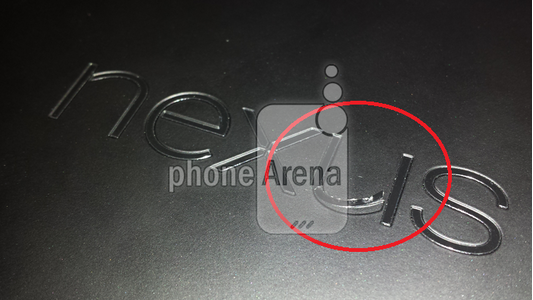 “After taking home the tablet and using it for 10 minutes, look at what happened to the Nexus name on the back of the tablet,” Phone Arena published.

Even though you wouldn’t want a flawed tablet after paying $230 for the 16 GB version or $270 for a 32 GB iteration, the good news is that this is only a cosmetic issue and performance isn’t affected.

Thus far, it appears to be an isolated incident, and there hasn’t been any other reports claiming that the tablet has any widespread cosmetic defects.

Google has not yet responded to our inquiries about the new Nexus 7’s cosmetic issues. The tablet is made by Google partner Asus, like the original Nexus 7.

Due to volume manufacturing, this wouldn’t be the first time a high profile device was taken out of the box with dings or scratches. When Apple had unveiled its design changes for the flagship iPhone 5 last year moving away from the glass sandwich of the iPhone 4S, some users, particularly those who had chosen the black version of the iPhone 5, noticed that when they removed the smartphone from the box, there were apparent scratches either to the rear aluminum shell or nicks to the chamfered edge. It was reported that Apple was forced to ramp up quality control at its partner’s manufacturing facilities.