Last July, Google released the Nexus 7, a collaboration with Asus and its first Nexus-branded tablet. The device and its 7-inch display became a success thanks to its vanilla Android software, its portability, its high-end hardware and its cheap price tag. Until today, the device had been available on the Google Play Store. No longer.

Read: Where to Buy the New Nexus 7.

The old Nexus 7 is no longer available on Google Play.

While the Nexus 7 still is visible on Google’s website, there is no longer an option to buy the older models, leaving those hoping for a discount or those uninterested in the new Nexus 7 without an option to buy. While Google has not yet confirmed anything, we imagine that the Nexus 7 won’t make a return to the Google Play Store. 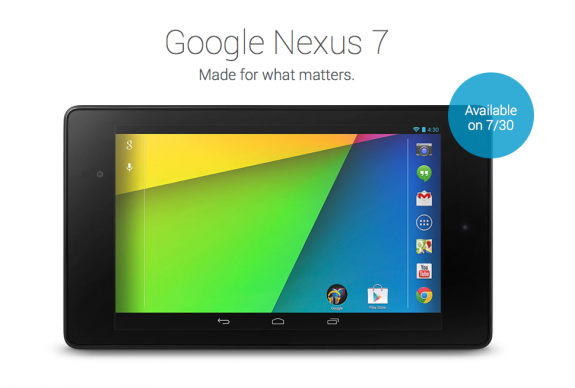 This means that those looking to snag the older model will need to head to a local retailer before stock dries up. The device has been deeply discounted through retailers like OfficeMax and Staples though once stock dries up, we imagine that the device will get taken down. Already, we’ve seen the device disappear through Best Buy’s website.

The new Nexus 7 is likely the more enticing of the two as it comes with a number of significant upgrades including a new slimmer design, a better display, faster processor, rear camera, and LTE data speeds.

It does, however, come with a more expensive price tag as it features a $230 starting price as opposed to the familiar $200 price tag of the older Nexus 7. The 32GB Nexus 7 will check in at $270 while the LTE model will arrive with a $350 price tag. The Wi-Fi only models roll out on July 30th while the LTE model touches down in the coming weeks.