The new Nexus phone, presumed to be called the LG Nexus 4, has been reviewed ahead of its rumored launch date of October 29th.

Onliner, the same website that leaked the LG Nexus 4 several times this week, posted a full review of the device complete with detailed specifications as well as a side-by-side photo op with the previous Nexus smartphone, the Samsung Galaxy Nexus. 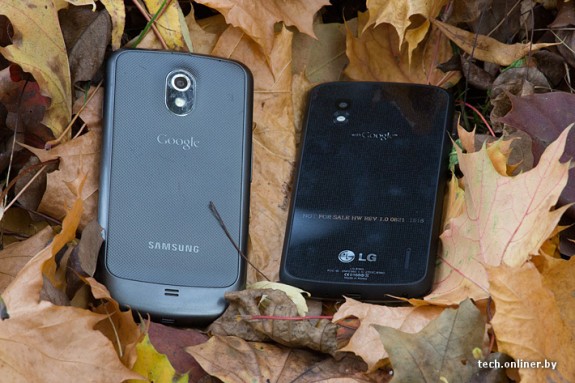 Galaxy Nexus on the left, Nexus 4 on the right.

The back of the new Nexus phone, unlike the Galaxy Nexus’, possesses no hump. It’s flush. The review also claims that the back is both smooth and glossy which could mean that it’s made of scratch-resistant glass. They took a key to the back to try and scratch it and could not do so.

The new Nexus phone does not contain any metal elements in its design. Instead, it’s made of plastic, just like the Galaxy Nexus.

Its display, which measures 4.7-inches, is a True IPS display which means that its not PenTile Matrix.The screen sports HD resolution, something that does not differ from the previous Nexus smartphone.

LG Nexus 4 has an 8MP rear camera, no pins for accessories, and it appears that the phone is running Android 4.1.2 Jelly Bean, the latest from Google. It’s certainly possible that it could launch with Android 4.2 on board but at this point, it’s unclear. 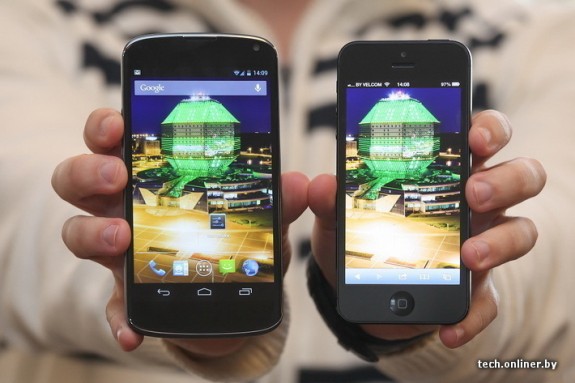 The device will also have a quad-core processor and 8GB of on board storage though Google may opt to sell one with a larger amount of storage space given the lack of a microSD card.

Google is rumored to be announcing the LG Nexus 4 on October 29th, likely at the All Things D: Dive Into Mobile conference where Andy Rubin, Google’s Android chief, is scheduled to speak.

In 2012, Rubin introduced the Motorola Xoom and Android 3.0 Honeycomb at the event so there is a distinct possibility that a LG Nexus 4 launch could occur that day as well.