Smaller is in for the iPhone 5 according to the latest rumors and leaked parts.

New photos from the Chinese newspaper Apple Daily and photos from French site Nowhereelse.fr provide a look at two ways the new iPhone 5 may be smaller.

While rumors of a smaller dock connector and  thinner iPhone are not new, these new leaks give us more details on what Apple might announce at the supposed September 12th iPhone 5 launch and upcoming release date.

“Introducing the thinnest iPhone ever!”

When Tim Cook takes the stage in a few weeks at the rumored iPhone 5 launch event we expect to hear major claims, and one just might be that this is the “thinnest iPhone ever.”

Analysts are predicting a thinner iPhone, with a 7.99mm thin iPhone 5 being thrown around since early this year. Despite the large number of purported iPhone 5 case leaks and fully assembled iPhone 5 devices posted in photos and in videos the thickness of the iPhone 5 remained a mystery.

Finally, Apple Daily publishes photos showing measurements of an assembled iPhone 5 housing. This may not be the real iPhone 5, but it is the first time we are able to get a look at the thickness. 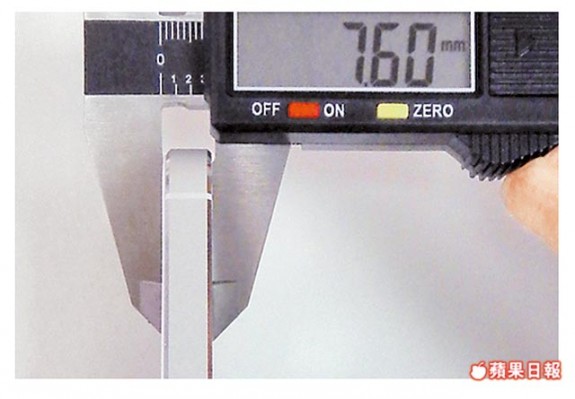 Photo appears to show the iPhone 5 is 7.6mm thick.

Apple Daily claims the new iPhone will be a remarkable 7.6mm thick. That’s incredibly thin for a smartphone, so much so that it is hard to believe.

The Motorola Droid RAZR is a slim 7.1mm and the HTC One S measures in at 7.8mm thick, which is a feat many phones can’t claim. Thin phones are known for bad battery life, which makes a thin 4G LTE iPhone cause for concern.

The Droid Razr is 7.1mm thick, to provide an idea of the possible iPhone 5 size.

The Droid RAZR MAXX is 8.99mm thick, but boasts a massive battery capable of lasting all day without even trying. Many of us prefer thicker phones with better battery life to thin phones that need a charge halfway through the day.

While Apple is said to be shrinking the Phone 5 in size, it is also rumored to be hard at work on a new smaller dock connector which will be a part of all mobile products at the iPhone 5 launch event.

Tim Cook may call this a “Smarter MagSafe dock connector,” when talking about iPhone 5 features.

New photos on Nowhereelse.fr provide a closer look at the possible 8-pin or 9-pin dock connector and show a ring that may make plugging the iPhone 5 in to charge easier.

The ring around the smaller dock connector hints at a MagSafe style dock.

First off, the ability to insert the cord in either direction. The MacBook notebooks let users charge with the plug in either direction. If the new smaller dock connector offers this, it will be much easier to plug in your iPhone to charge overnight. It’s a small detail, but one Apple may be paying attention to.

If the new dock connector uses a MagSafe dock connection it could also prevent dropped iPhones by unplugging when there is tension instead of pulling the iPhone with the cable.

The next generation iPhone, often called the iPhone 5 is expected in weeks, with a possible iPhone 5 release date of Friday September 21st. In addition to a thinner iPhone and a smaller dock, we expect a new Apple A5X processor and 4G LTE connectivity. Rumors point to a larger 4-inch display and a new metal back.