A new Samsung smartphone with Android 4.0 and a physical QWERTY keyboard will be heading to T-Mobile at some point in the future.

TMoNews has leaked an image of the SGH-T99, which was once thought to possibly be the Samsung Galaxy Nexus, but has instead revealed its face to be a device with a physical QWERTY keyboard.

Firm details about the device remain scarce but it appears that it rocks a 5MP shooter on the back, Android 4.0.4 Ice Cream Sandwich out of the box and a Snapdragon processor made by Qualcomm. It’s unknown whether it’s a dual-core S3 processor or a Snapdragon S4 processor. 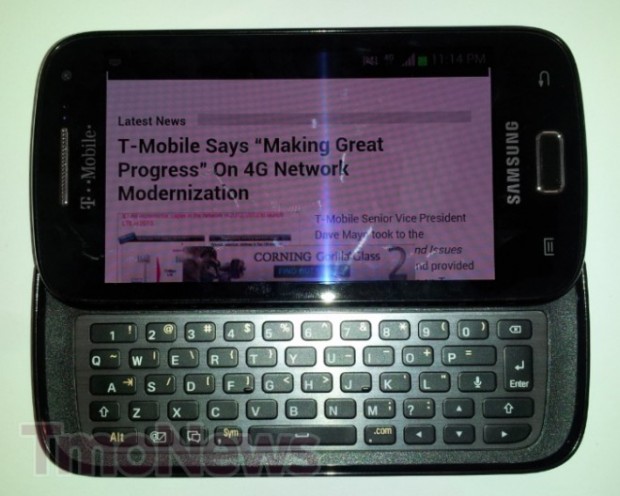 It’s unclear if it still possesses a screen that sports 720 x 1280 resolution as was rumored before. Those who still love physical QWERTY keyboards should definitely keep their fingers crossed that that’s the case.

The new Samsung QWERTY also is in possession of a nice looking 5-row QWERTY keyboard that should definitely appeal to that crowd. It also has a physical home button, front-facing camera and navigation keys on the bezel. It’s unknown right now just how big the screen size is but it doesn’t appear to be huge.

Other than those tidbits, the device remains a relative mystery as it heads to T-Mobile’s network.

T-Mobile will soon be launching another Samsung device in the Samsung Galaxy S III on June 21st and we don’t expect this device to show up before then as T-Mobile won’t want another device to steal the Galaxy S III’s thunder.