It looks like AT&T and Samsung are hard at work prepping the forthcoming Android 4.0 Ice Cream Sandwich software build for the 5.3-inch Galaxy Note smartphone. A new leaked ROM with Google’s Android 4.0.3 update was just leaked on the Internet with a build number of UCLC3.

The UCLC3 is said to not introduce any new features from the previous UCLC5 build that was leaked before. Instead, UCLC3 is said to offer a number of performance and stability fixes and users who have loaded the latest build onto their AT&T 4G LTE-capable Galaxy Note have noted that the new ROM performs more smoothly than the prior leaked version, according to Brief Mobile. 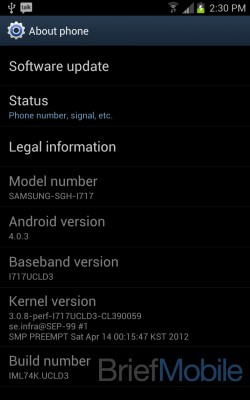 Users who cannot wait to get their hands on the final official Android Ice Cream Sandwich ROM whenever AT&T finishes their testing can get the leaked build right now if they are enterprising and daring. Brief Mobile has posted the download links and the instructions on getting the software loaded on your Galaxy Note right now.

Keep in mind that this isn’t a finalized ROM and there may still be bugs present. Additionally, installing this build may also void your warranty should any problems arise.

The oficial Galaxy Note Ice Cream Sandwich build will also come with a suite of premium apps that will work with Samsung’s S-Pen for handwriting, drawing, note-taking, and annotations. These apps will help you maximize the available pen-enabled technology that comes with your handset as well.