Today Microsoft sent invitations to its pre-E3 press conference on June 10 where it will debut the launch lineup of games for the New Xbox.

The invitations invite selected press to Microsoft’s annual pre-E3 press conference at The Galen Center in Los Angeles. The invite doesn’t give any further hints about the content of the event. Microsoft previously said it will focus on new Xbox games at its E3 press conference this year. 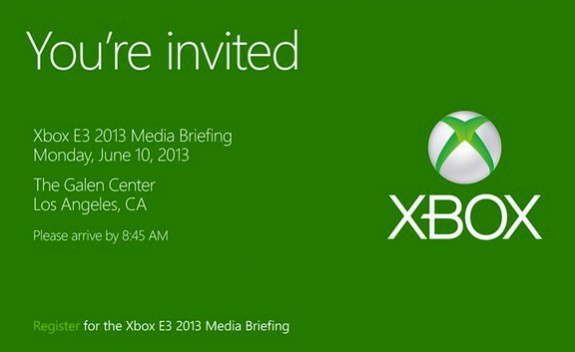 While the invitation is only for press, Microsoft’s Larry Hyrb confirmed on Twitter that it will stream the press conference online. More details will come later this month, though streams on Xbox Live, Xbox.com, GameTrailers and Spike seem likely. Those are the services that will stream the new Xbox reveal on May 21.

Microsoft didn’t give an exact time for when the press conference starts, but the line for press starts at 8:45 a.m. PT. A start time around 10 a.m. PT/1 p.m. ET sounds likely.

Notably the date is the same that Apple’s WWDC will begin. There is a strong possibility that Apple will present the new design of iOS 7 and OS X 10.9 at the same time Microsoft announces what new games it has planned for later this year.

The two events (paired with EA and Ubisoft events as well as a likely Sony press conference) will make June 10 a very busy day for gamers or just those who are really into tech and games.

Recent rumors said Microsoft will have Crytek’s Ryse and a new Forza game ready for the launch of the new Xbox. Those games will likely make their debut at the pre-E3 press conference (if not earlier).

Microsoft will also likely show off gameplay of the newly announced Call of Duty: Ghosts at the event as it did with previous CoD games. Activision and Infinity Ward will show the new engine of the new first-person shooter at the Xbox event on May 21, but may give more details in June.