Next iPad Could Have Carbon Fiber Body According to Apple Patent 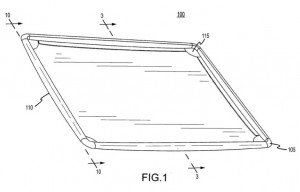 While a patent for a carbon fiber iPad was seen at the U.S. Patent and Trademark Office, it doesn’t mean that such a design may get released for use. However, carbon fiber may give Apple and its users some benefits, including a lighter weight tablet as well as better reception for WiFi and 3G radios in a tablet of this design.

According to the patent filing, Apple says that plastic shells aren’t durable enough and metal shells, like the unibody aluminum case found on the iPad, may be too heavy. The weight of the iPad has been a big concern among adopters of the consumer-oriented tablet who intend to use it as an e-reader as it would be uncomfortable to hold for long durations. With carbon fiber, however, Apple intends on overcoming the obstacles of weight and durability presented by either metal or plastic.

However, Apple is aware that carbon fiber alone may not be strong enough and suggests that it may re-inforce it by layering carbon fiber, making it stronger.

Other than the weight-saving feature of carbon fiber, another benefit may be that the material would be better for wireless signal reception than metal. Currently, on the aluminum iPad, Apple had placed the WiFi radio of the WiFi-only model behind the plastic Apple logo for better reception while the WiFi + 3G model has the radios placed in a thin plastic strip at the top of the model. Having such a strip obscures the unibody design and switching to a carbon fiber shell could help to preserve the sleekness of a unibody design without resorting to a plastic strip. This would definitely be good to accommodate the GSM-CDMA radios that are rumored for the next world-ipad compatible model that’s rumored to work on Verizon Wireless as well as AT&T in the U.S.

Via: AppleInsider and Ubergizmo