Nexus 4 Back in Stock at Noon Pacific

Shortly after Google informed those who possessed a back ordered Nexus 4 order that their devices would be shipping out this week, Google informed the masses that the Nexus 4 will be back in stock today on the U.S. Google Play Store starting at Noon Pacific time.

The email was sent out to those who signed up for more information about the return of the Nexus 4 on the Google Play Store and it informs potential customers that stock is returning today at Noon. Google doesn’t specify how much stock will be available once the time rolls around but those who weren’t able to order and want a Nexus 4 soon will likely want to place an order once that time rolls around.

We imagine that both the 8GB and 16GB Nexus 4 will be back in stock when the clock strikes Noon though Google makes no mention of any specifics. Something else to keep in mind, the Nexus 4 went on sale about five minutes early last time around so those who want to order one today will also want to arrive early. 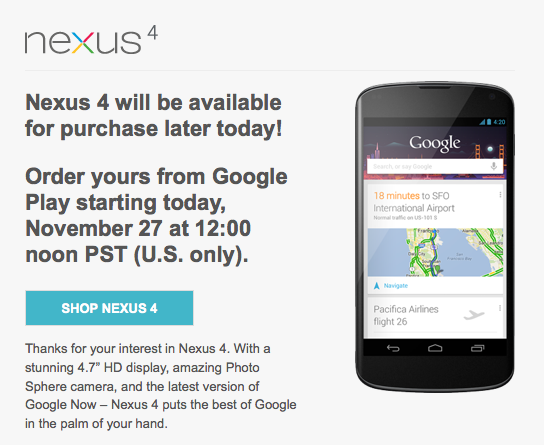 This is the first time that the Nexus 4 has been back in stock on the U.S. Google Play Store since November 13th when the Nexus 4 went on sale to the public for the first time. That day was unfortunately marred by site error’s and loads of confusion as the company seemingly oversold its stock of its new Nexus.

Shortly afterward, Google starting sending out emails informing customers who ordered the device that their Nexus 4 was back ordered due to overwhelming demand and that it would ship out in three weeks. Google kept that promise and last night told those with back ordered devices that the phone would ship out sometime this week. It did not say when exactly but said that emails would be sent out with tracking information, similar to the emails that those who were successful in placing an order received earlier this month.

The Nexus 4 is Google’s latest Nexus smartphone and the device on the Google Play Store is the unlocked HSPA+ version of the device. Due to its low starting price tag of $299, much lower than most unlocked smartphones, its high-end hardware and Android 4.2 Jelly Bean software, the Nexus 4 saw a ton of demand on its first day of availability, selling out around the globe within hours.