Nexus 4 Lands on Another Carrier Amid Supply Issues

The Nexus 4 is now available on Virgin Mobile UK. Shoppers in the UK can buy the Nexus 4 free with a 24 month contract that starts at £31 per month.

The Virgin Mobile UK Nexus 4 joins O2 UK and Three as an official carrier for the Nexus 4 according to Android Central, even as stock of the pure Google smartphone remains scarce throughout the country and in the U.S.

The Google Play Store UK remains sold out of the Nexus 4, as does the U.S. Google Play Store. As it stands, Virgin Mobile UK may be one of the best places to find a Nexus 4 in stock, but a two-year contract is not an appealing option for a phone with a low off-contract price.

The entry-level Nexus 4 plan on Virgin Mobile UK includes 200 minutes, 500 texts and 500MB of data with plans ranging up to unlimited mobile web and unlimited texts for £39.

Don’t get your hopes up for a Virgin Mobile Nexus 4 in the U.S. Virgin Mobile USA is owned by Sprint, which uses network technology that isn’t compatible with the Nexus 4. 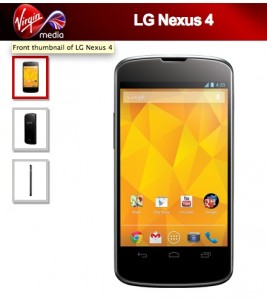 U.S. customers can use the Nexus 4 with Straight Talk, Red Pocket Mobile, T-Mobile pre-paid and a host of other carrier options which use AT&T or T-Mobile networks.

The Nexus 4 is nearly impossible to buy, and has been since mid-December when it was last available in the Google Play store. LG recently stated there are no supply problems with the Nexus 4, despite the company’s inability to deliver sufficient stock to Google and T-Mobile.

T-Mobile will soon sell the Nexus 4 in all U.S. retail stores, but based on leaked shipping manifests it looks like stock will be severely limited.

Read: Nexus 4 Launch – Not Worth the Wait

The Google Play Store offers the best deal on the Nexus 4, at $349 for an unlocked, contract-free 16GB Nexus 4, but the store is out of stock with no anticipated date for the Nexus 4 to go on sale again.