Rumors have been swirling about this month’s Google I/O with rumors suggesting that Google may have a Nexus 7 2, Android 4.3 Jelly Bean or Android 5.0 Key Lime Pie and quite possibly, a new Nexus 4 on the way at the event. And while the latter of the three remains unconfirmed, new evidence suggests that the arrival of a new Nexus 4 remains a possibility.

With Google I/O just a few short days away, rumors of what might be announced at Google’s yearly developer’s conference have swirled. Recent whispers suggest that Google may introduce Android 4.3 Jelly Bean and not Android 5.0 Key Lime Pie, a new Nexus 7 2 with several upgrades and quite possibly a new Nexus 4 LTE. 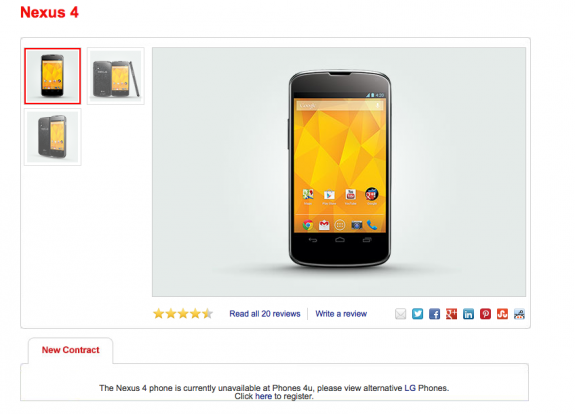 There are also, less credible rumors, of a new Nexus 5 making an appearance at Google I/O. But at this point, a Nexus 4 LTE, given that the Nexus 4 has only been on shelves for a smart time and that Google typically doesn’t release a Nexus until the holiday, is more likely.

While there haven’t been a whole bunch of rumors in regards to a new Nexus 4, the ones that have surfaced have suggested LTE capabilities and at least 32GB of storage space. To many this would be odd, but remember, Google announced a Nexus 7 3G many months after the Wi-Fi only model arrived so it’s possible that Google may have something up its sleeve.

We still don’t have firm confirmation but recent developments seem to point to something at work. TechRadar caught wind of two retailers in the UK, Phones4U and Carphone Warehouse, who are no longer selling the Nexus 4.

Their Nexus 4 pages, which were live as recently as April 25th thanks to Google’s cache, are no longer live with both retailers no longer listing stock for the Nexus 4. In fact, the Carphone Warehouse page has vanished completely. Of course, this isn’t a definitive sign that something is on the way, but it certainly leaves the door open.

Over at Google, Nexus 4 shipping times remain better than ever with Google able to ship out Nexus 4 models in one to two days. So if there is something arriving at Google I/O, the company is not giving anything away with dwindling stock.

It’s possible that this could be in error and that the Nexus 4 will return soon, neither company has commented, but it’s a little strange to see them both kill stock at the same time, especially when supply is under control.

Whether it means a new Nexus 4 LTE, Nexus 5, or something else entirely isn’t clear but with Google I/O coming up in just a few days, we may find out just what Google has in store for consumers in the second half of the year.