The Nexus 4 is sold out in the Google Play Store as of 10 AM Eastern on Saturday December 15th.

The 16GB Nexus 4 was on sale, with a six to seven week wait, through early Saturday morning. The higher capacity model joins the Nexus 4 8GB model which has been unavailable since December 3rd.

At this point the Nexus 4 is sold out in all models at the Google Play store. The T-Mobile version is out of stock at most stores, but we’ve heard that some T-Mobile locations may receive extra stock in the coming weeks. 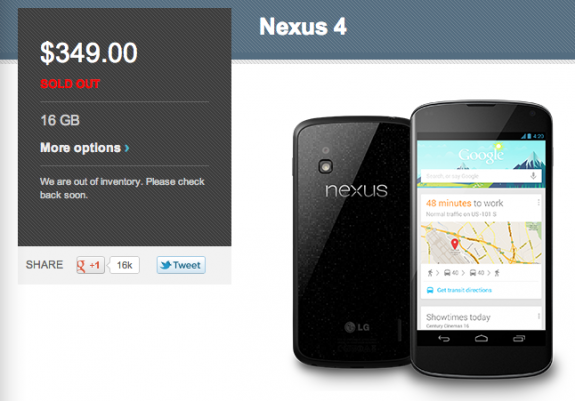 The Nexus 4 experienced a rough launch, with erroneous out of stock messages during the first two times Google’s flagship phone went on sale. High demand for the Nexus 4 pushed eBay prices to iPhone-like levels, prompting the online auction giant to limit sales of the device as it does for many Apple products.

Lucky buyers were able to buy the Nexus 4 from T-Mobile in early December, but the carrier is also familiar with issues dring the launch.

Given the timing of this out of stock message, it’s likely that the Google Play Store could be out of stock of the Nexus 4 through the end of 2012.

LG confirmed that the shortage is due to, “high demand” for the high-end smartphone with a budget price. Unlike most smartphones on the market today, the Nexus 4 is primarily sold unlocked without a two-year contract at half the price of an unlocked contract-free iPhone 5.

When asked about the timing of new Nexus 4 sales in early December Google told Gotta Be Mobile it did not have timing to share regarding the 8GB model. We’ve reached out to Google for a comment on when the Nexus 4 will be on sale in the Google Play store again, but did not receive a response when this article was published.