The white Nexus 4 has made an appearance on the Google Play Store today, and is now available at T-Mobile, revelations just a few days after it arrived on shelves in Hong Kong after a lengthy period of rumor and speculation.

At Google I/O, Google failed to announce any new additions to the Nexus 4 family, instead opting to produce a Samsung Galaxy S4 Nexus or Galaxy S4 Google Edition that will be coming to shelves in June. Shortly after, the white Nexus 4 popped up along with a rumor that suggested it would be available with Android 4.3 on June 10th. 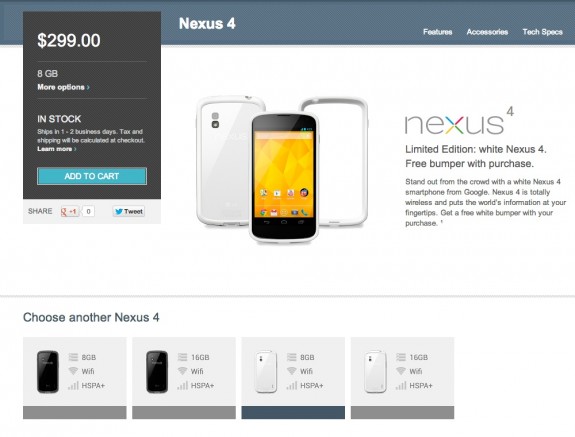 The white Nexus 4 has appeared in the U.S. today.

Android 4.3 still isn’t out but the white Nexus 4 is. LG announced the device and put it on sale in Hong Kong with other regions slated to get the device in the future. Oddly enough, the device has shown up on the U.S. Google Play Store today, available to buy alongside the elder statesman, the black Nexus 4.

At T-Mobile however, the device is readily available for purchase with the carrier announcing that it’s available only for a limited time starting today. The device costs $427 up front though T-Mobile customers will not be able to buy it with a monthly installment plan, instead, forced to pay the money in full up front. This could change, but at the moment, this is what consumers are facing. 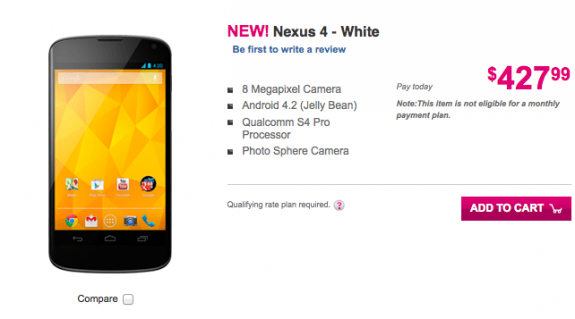 T-Mobile is offering the white Nexus 4 as well.

The device is listed as shipping out in one to two days with the same price as the black Nexus 4 that has been around since November. Google says, like T-Mobile, that’s a limited edition device and that it will be shipping out with a free bumper case. The company does not elaborate on how many devices it may have in stock.

The device will come with all of the bells and whistles of the other Nexus 4, which means it will have a 4.7-inch 720p display, quad-core processor, 8MP camera, and Android 4.2 Jelly Bean.