Last week we received some renders showing off the 2015 Nexus 5 for the first time, giving us a glimpse into the future regarding what to expect from Google’s Nexus phones in 2015. Today though, you can forget the renders because real photos of Google’s next smartphone just leaked, and below is everything you need to know.

For months we’ve been following small rumor and leads about what’s next from Google, and after the rumors started heating up a few weeks ago all the details have started to align. And while we don’t know exactly everything yet, we have a pretty good idea of what it will look like, and some of the next-gen features Google plans to incorporate into its new smartphones

Uploaded to the Google+ Nexus community are photos that are allegedly the new 2015 Nexus 5. This 100% matches the renders from last week, rumors we’ve heard in the recent past, and even some cases that have been floating around. Google’s impressive new 5.2-inch Nexus 5 for 2015 with a fingerprint scanner and more is all but confirmed with these two new blurry photos. 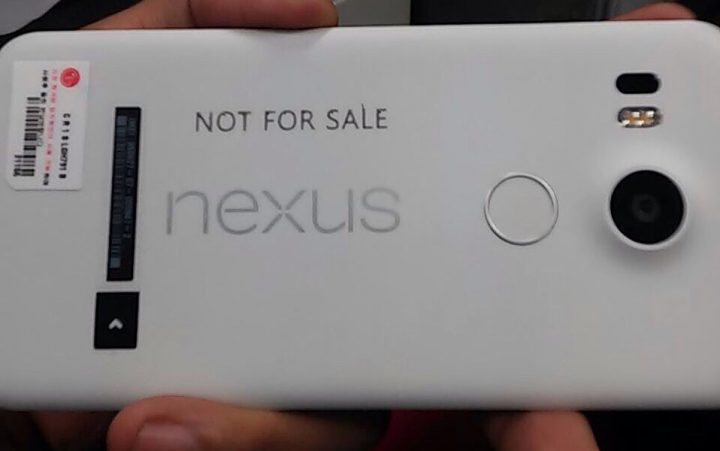 A few months back reports about the Nexus for 2015 came with a twist, revealing that Google could potentially be planning to release two Nexus phones this year. One made by LG to replace the Nexus 5, and a big 5.7-inch smartphone by Huawei that would replace the Nexus 6.

Since then we’ve continued to hear more of the same. A 5.2-inch LG Nexus 5 for 2015 is coming first. Then, at the same time or about a month later Google and Huawei will release a 5.7-inch Nexus 6 to replace last years model, and it will be Google’s high-end device this year, with the Nexus 5 being more of a budget smartphone coming in under $400. Now, when you look at the photo above and below, and read the specs, this is shaping up to be one of the best smartphones around if LG and Google can truly deliver it for under $400. Here’s the full details based on the latest rumors.

As you can see the screen is 5.2-inches but only 1080p resolution. Which is fine as the 2k displays on some other phones aren’t all that necessary, and this is likely a move to keep the cost down, and improve battery life. Rumors also suggest a more wallet-friendly 8-core Snapdragon processor, slightly lower than the 8-core chips found in the Galaxy S6, Galaxy Note 5, or even the HTC One M9. And while it might not be the best, it’s more than enough for any and all buyers.

The photos here confirm the rumors that this year Google worked really hard with LG on the camera, and this Nexus will sport one of the best f/1.8 cameras around. That’s faster than the f/1.9 camera on the Galaxy S6, although this is only 13 megapixels. Not 16 like the Galaxy S6 or LG G4. 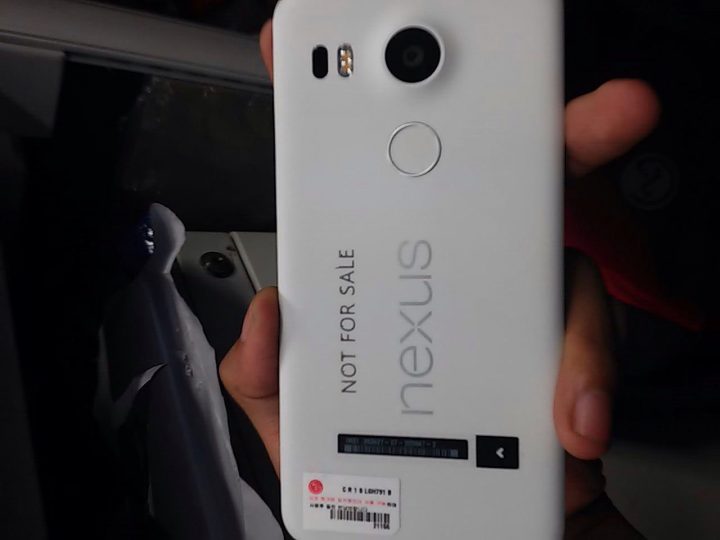 Confirmed by the photos here today we’ll have a rear fingerprint scanner for improved security, logins, and easy mobile payments with Android Pay, which will debut with the Android 5.2 M release in Q3. That said, the photos don’t confirm anything else. Like the dual front facing speakers we saw in earlier leaked renders, and more.

However, we are seeing a device that is made by LG, matches everything we’ve heard so far, and this time is out and in the wild being used. It’s also covered with a clear “Not for sale” branding, and some other markings and labels for verification. Here’s a video of the earlier leaked renders, lending further credence to the fact that this is the real deal.

While we’d love the fingerprint scanner to be on the front, we have front facing speakers taking up all the room there instead. This also matches LG’s recent phones of buttons on the back. However, the LG Nexus 5 for 2015 will have power and volume buttons on the side, with a big camera on the back, a fingerprint scanner, dual LED flash, and a laser auto-focus for improved imaging.

Google has already confirmed Android M will be released (or officially announced) in Q3, which ends in September. This means we have a little over a month before we know all the details, including a potential release date. Stay tuned for more details.