The first rumors about new Nexus smartphones for 2015 started to emerge way back in February, and since then they’ve continued to arrive at an increasing pace as summer comes to and end. Lately more and more details have surfaced, and today some photos and a video of renders is giving us our first look at what could be the Nexus 5 2015.

A few months back reports about the Nexus for 2015 came with a twist, revealing that Google could potentially be planning to release two Nexus phones this year. One made by LG to replace the Nexus 5, and a big 5.7-inch smartphone by Huawei that would replace the Nexus 6. Lately most of the leaks are regarding the Nexus 5, including what we have today.

Earlier this month a massive leak surfaced out of China claiming to know all the details about the new Nexus 5 for 2015. This differed slightly from earlier reports, but with it being closer to a release date, it seems plausible. Today a new video is making the rounds that’s reportedly a near-official render based off of blueprints and details given to case manufacturers. 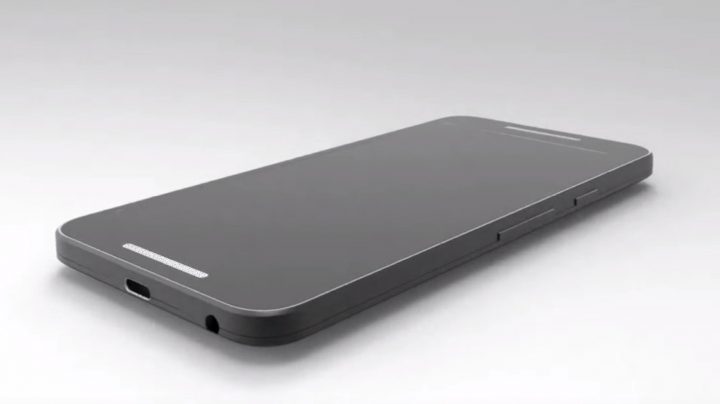 Concept Render Based Off Leaks

With smartphones coming manufacturers send out schematics or a blueprint, details about the smartphone including where all the ports are, sizes, and information so 3rd party manufacturers can build cases and such. We’ve seen this with iPhone accessories and cases, and now the same is happening with Google’s next Nexus 5.

According to various rumors we’ve heard thus far, leaked details from @Onleaks, and information sent to case manufacturers, the photos and video here today were created. This is a very generic vision of what the 2015 LG-made Nexus 5 will look like, but our first look nonetheless. This design perfectly matches those leaked cases from last week, too.

Here we see an aluminum design with a black matte plastic back, dual front facing speakers, a big impressive camera, and then of course a fingerprint scanner and USB Type-C connector on bottom. Here’s the video.

Again, the video above is a render that was made based off of information available, leaks, and schematics reportedly sent to case manufacturers about the new LG Nexus 5. Things like design materials, textures, colors and more all are missing, as is the Nexus branding. This is a very generic example of what we can expect to see in the next 1-2 months, if those rumors are even accurate.

We’ve heard a lot of different reports about the new Nexus 5 and Nexus 6 for 2015, and here’s the latest full spec sheet for the Nexus 5. At least according to rumors.

The details provided above pretty closely match the video, which lends credence to the leaks we’ve been hearing as of late. That said, things are always subject to change.

From what we’ve heard thus far it sounds like a new LG Nexus 5 is going to be announced around the end of September along with Android M, and both will be released to the public sometime in October. Google’s already confirmed a Q3 release for Android M, which ends in September, and each new version of Android typically arrives with new hardware.

It looks like a rather impressive 5.2-inch Nexus 5 will be arriving sometime soon, and it’s reportedly going to cost between $300-$400, similar to the Nexus 5 of old. That may be followed up later by the 5.7-inch Huawei Nexus 6. We’ll continue looking for more details, and for now users can expect more and more details to start surfacing as the release nears.