Android 5.1 also brought problems to owners of Google’s Nexus smartphones and tablets and Nexus 5 users were particularly vocal about the problems plaguing their phone. I was one of them.

Google’s Android 5.1 update didn’t ruin my battery life or destroy my Wi-Fi connection but it did bring some annoying issues to a device that had been working fine on Android 5.0.1. Those issues? App crashes and random reboots, products of a Android 5.1 memory leak problem.

In April, to the relief of many Nexus 5 users, Google confirmed an Android 5.1.1 update. It took several weeks for Google to confirm a Nexus 5 roll out but the roll out is here and it’s finally hitting devices all over the United States and around the world.

Android 5.1.1 is a small bug fix update for the Nexus 5, around 15MB in size, but it comes with some important fixes including one for the device’s camera. It’s an important update and one that many Nexus 5 users have their eyes on as we push into the month of June.

Before getting into the review, I want to note that mileage is going to vary from device to device, person to person. I probably don’t have the same applications installed and there’s a chance that I use certain apps, games and my device’s home screen more than you do. 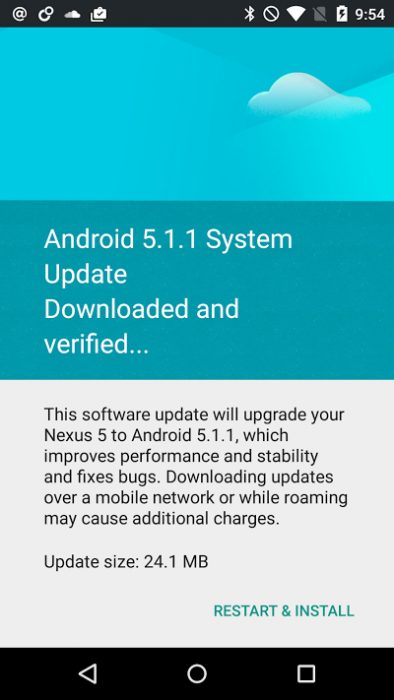 So you need to consider this a general guide as you try to decide whether Android 5.1.1 Lollipop is worth installing on your Nexus 5. I’m one man with one Nexus 5 device. I encourage you to seek out feedback from other Nexus 5 users before making your final decision about whether to install it or not.

I’ve spent a full week with the Android 5.1.1 update and in the past seven days, I haven’t run into any major issues with the applications I have on board the Nexus 5.

While certain apps were crashing a lot in Android 5.1.1, Play Music for instance, I haven’t noticed any major problems with Android 5.1.1 on board. Play Music has been extremely stable and only Facebook has crashed in the past seven days. My other core apps like Google Chrome, Asana, Slack, Spotify, SoundCloud, YouTube, and Twitter are all holding up.

I have 50+ third-party apps installed on the Nexus 5 though my applications are probably not the same as the applications you have on your Nexus 5. That would be weird. So, all I can tell you is, make sure your apps are updated before installing Android 5.1.1 .

You’ll also want to make sure that you take a look at feedback from your fellow Nexus 5 owners, especially if the app is critical to your daily routine.

I’ve been using the Nexus 5 a lot over the past week and I have yet to notice any major battery drain. As I’ve noted many times, the Nexus 5’s battery life has never been amazing but at least Google hasn’t killed my battery with its Android Lollipop updates. Its been par for the course since November. I’m still able to get close to a full day of use out of the Nexus 5 even during heavy use.

I’m seeing complaints about bad Nexus 5 Android 5.1.1 battery life but the problems don’t appear to be widespread. In other words, there’s a good chance that your battery will remain stable after moving to Android 5.1.1 Lollipop. There’s always some risk involved so you’ll definitely want to dig if you’re at all concerned.

Remember, it often takes battery life a few days to settle after an Android update. If it doesn’t settle, or if you’re concerned about potential battery life problems. you’ll want to consult our list of fixes for bad Android 5.1.1 battery life. Most of the time, it’s not the Android update causing the problems. Typically, it’s a rogue app or bad habits.

Wi-Fi is still fast and stable, I’ve been able to pair the Nexus 5 with an assortment of Bluetooth devices including various speakers and headsets, and AT&T’s LTE network is still fast and reliable when I take the phone out of the house.

Updates like Android 5.1.1 aren’t supposed to break connectivity. So if it does, you’ll want to take a look at our list of fixes for connectivity problems. There’s a good chance that you’ll be able to iron out the problem if something does go awry after getting Android 5.1.1 up and running.

Android 5.1 was very unstable on my Nexus 5. Over the course of several weeks, I encountered numerous random reboots where the phone would restart itself for no apparent reason. I wasn’t alone. Android 5.1 has a serious memory leak problem but it appears that Android 5.1.1 has ironed those out, at least on my phone.

I haven’t seen a single random reboot in the seven days that I’ve been using the Nexus 5. That’s a far cry from the week before when I probably saw close to 10 random reboots. I’ve run into random reboots on all of my devices (iPhone, Galaxy S6, etc) but the problems were never that frequent. It was annoying but Android 5.1.1 appears to have fixed the problem on my phone.

Nexus 5 owners were also complaining about an issue where the camera app would crash when trying to access it through a third party application like Facebook. I’ve been trying to replicate the problem in Android 5.1.1 but so far I’ve been unable to. Google outlined a fix for this issue in the Nexus 5’s Android 5.1.1 change log and it looks like the fix worked.

I’ve been using the phone extensively for a week and so far, the update is very stable. That doesn’t mean that there aren’t bugs, it just means that I haven’t run into any. Yet. Bugs can pop up at any time and there’s a chance that something will jump out in the weeks down the road. So far so good though.

Android 5.1.1 is still fluid on the Nexus 5. Animations and transitions are fast and I haven’t noticed any general sluggishness or lag. While I’ve heard about performance problems on the Nexus 4 and Nexus 7, I haven’t seen many complaints about lag or freezing on the Nexus 5.

Is the Nexus 5 Android 5.1.1 Update Worth Installing?

Android 5.1.1 doesn’t come with any new features, just bug fixes, so there’s really no need to rush into things. Gather feedback and then make a call. Android 5.1.1 isn’t going anywhere.