A new Nexus 5 video is now available showing off Android 4.4 software and the Nexus 5 hardware. The Nexus 5 hands on video offers a close look at the Nexus 5 design and dives into the Android 4.4 KitKat update to show more details.

The Android settings page shows KeyLimePie, which we’ve seen in other leaked pre-release builds of Android 4.4 so that alone is not enough to discredit the video despite what some YouTube comments say.

We expect the Nexus 5 announcement today, though the actual time remains up in the air as Google has yet to make an official announcement.

The Nexus 5 features a 5-inch 1080P HD display and runs a Snapdragon 800 processor which should deliver always listening voice control according to a new leak.

Watch this seven minute Nexus 5 video for a closer look at the new Nexus 5 before Google officially unveils the device running Android 4.4 KitKat.

Update, this is a re-uploaded video from earlier this year, but the information is still of note.

In addition to showing off the Nexus 5 hardware which we’ve seen numerous times we get a closer look at the software which reveals the Nexus 5 16GB will ship with about 12.5GB of free storage for apps and movies. Some Android devices ship with much less available storage thanks to manufacturer customizations. 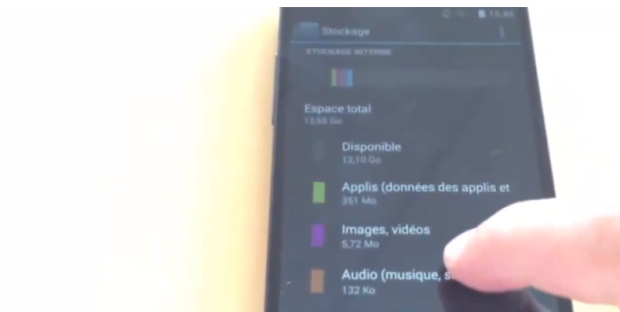 The Nexus 5 hands on shows how much storage is available to users.

The video shows off the camera app with Photosphere included as well as a YouTube video to demo the HD display on the Nexus 5. Other demos include loading Google Earth and a variety of Google apps that show the capabilities of the device.

In addition to this hands on video, a Reddit user is answering questions about the new Nexus 5, sharing the few remaining secrets Google had up its sleeve. This includes the ability to control the Nexus 5 with your voice, even when the display is off, like the Moto X and Droid Ultra.

If Google announces the Nexus 5 today, it could go on sale in the Google Play Store by tomorrow morning. There may not be Nexus 5 pre-orders as users who get in first will likely see their Nexus 5 ship within a day, which could put the Nexus 5 on doorsteps early next week.

The Nexus 5 is expected in 16GB and 32GB models with a starting price of $349 for the 16GB and an expected $399 for the 32GB model. In addition to the Google Play store, look for retailers like Best Buy may sell the Nexus 5 and T-Mobile may also carry it soon after the announcement.