While much of the attention will be on how the Samsung Galaxy Note 3 compares to the likes of the iPhone 5S and the upcoming HTC One max, there will be another Android smartphone, or smartphones, that will challenge the Galaxy Note 3 for the attention of consumers. That device is currently dubbed the Nexus 5, a device that is rumored to be coming to replace the Nexus 4.

Both brought some likeable things to the table and were attractive options for those in the market for a new smartphone. The Galaxy Note 2 delivered a massive HD display, a blazing fast Exynos quad-core processor, a solid camera, tons of carrier options, and an improved S Pen that took advantage of some upgraded software. 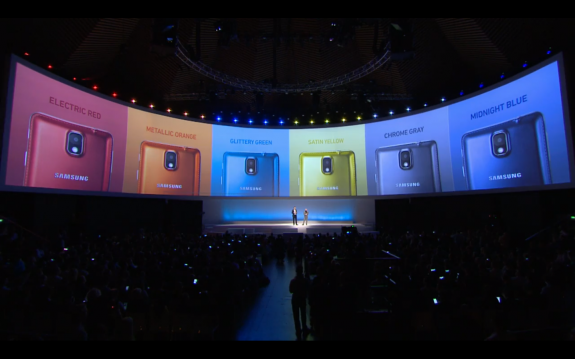 The Samsung Galaxy Note 3 was announced on September 4th.

The Nexus 4 arrived with an extremely cheap unlocked price that was paired with its vanilla Android software and its high-end hardware which included a large HD display, quad-core processor, solid camera, a few carrier options, and the perks of a Nexus-branded smartphone including fast updates from Google itself.

Earlier this month, we saw Samsung announce the Galaxy Note 3, the next-gen Galaxy Note that will be hitting shelves in the United States in early October. And just yesterday, we saw Google kill off the Nexus 4 completely, a sign that a new Nexus smartphone, perhaps a Nexus 5, is en route.

We know quite a bit about the Samsung Galaxy Note 3 already thanks to it being official. And while the Nexus 5 remains unofficial, leaks have offered up some pretty credible information.

Here, we take a close look at what to expect from the upcoming battle between the Samsung Galaxy Note 3 and the new Nexus smartphone, currently thought to be a Nexus 5 from LG, Motorola, or both. 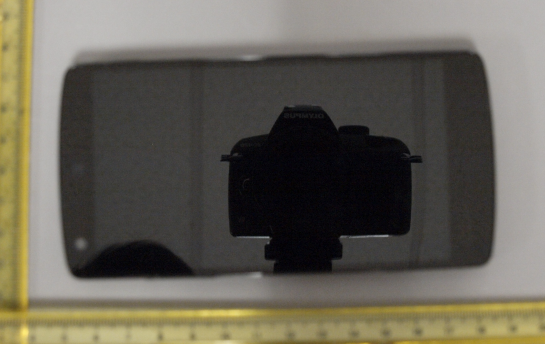 This is how it could look from the front, though, we caution that this likely isn’t a retail version.

Given that the Nexus 4 employed a massive 4.7-inch display and given the state of Android displays at the moment, we can’t see Google dipping any lower with the size of the Nexus 5’s display. There have been rumors that have suggested a screen size that is around 5-inches, something that makes sense if it’s called the Nexus 5 and is based on the LG G2 which uses a 5.2-inch display, but that still isn’t confirmed.

Samsung also tweaked the Galaxy Note 3’s design from a dimension standpoint as well, slimming it down to 8.3mm and dropping its weight down to a much more manageable 168 grams. The Galaxy Note 2 by comparison checked in with a 9.3mm frame and weighed a solid 180 grams. 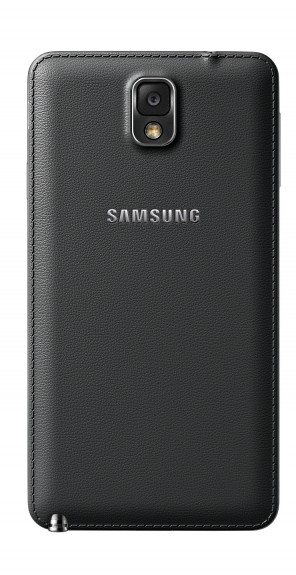 The Galaxy Note 3 uses a faux leather back.

From what we’ve seen, the LG Nexus 5 looks like it may take some hints from the Nexus 4, at least in the front, while using a design that is reminiscent of the new Nexus 7 in the back.

Leaks have shown a device that uses a smooth plastic black matte back with a gigantic Nexus logo plastered across the back, just like the Nexus logo found on Google’s new 7-inch tablet. The key thing here is that it looks like the Nexus 5 will join the Galaxy Note 3 with a plastic design. 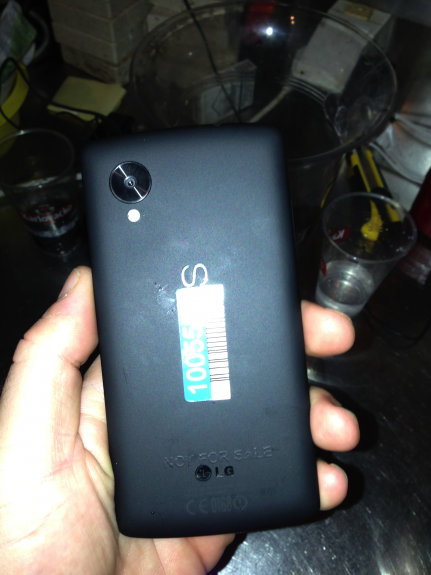 This could show the back of the Nexus 5.

We aren’t sure about the exact dimensions but we saw Google work to make the new Nexus 7 tablet slimmer and more lightweight so we could see the new Nexus smartphone shed some of its weight and thickness as well.

We expect there to be several key hardware differences between the Galaxy Note 3 and the Nexus 5. We expect them both to share a Snapdragon 800 quad-core processor and both have solid cameras, but here are the three major differences that we anticipate:

S Pen – The Galaxy Note 3 employs a powerful stylus called the S Pen that allows users to not only write and draw on the display but take advantage of some powerful software. The Nexus 5 will not have a bundled stylus.

Removable back – The Galaxy Note 3 comes with a removable back which allows for users to pop in an extended battery or easily replace one that is malfunctioning. The FCC filing for the Nexus 5 points to a non-removable back, something that the Nexus 4 didn’t have.

Expanded storage – Thanks to the microSD card slot on the Galaxy Note 3, users can expand up to 98GB of storage thanks to a 64GB microSD card. Google does not put microSD card slots on its Nexus devices so the Nexus 5 will be stuck with on board storage, and the cloud. 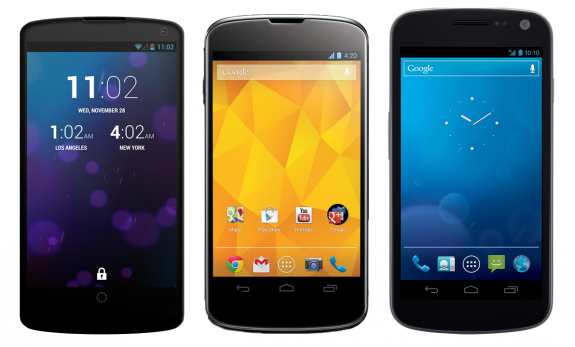 The rumored Nexus 5 seen here next to the Nexus 4 and Galaxy Nexus.

Google offered two storage variants for the Nexus 4, an 8GB and 16GB model, and that seemed to work out well. So we expect it to offer two storage variants for the Nexus 5. We wouldn’t be surprised if the company bumped up the storage options, like it did with the new Nexus 7, to 16GB and 32GB to accommodate for larger application sizes and file sizes in general. If it does that, we expect a price jump, something that should be expect anyway given that it will likely have a 1080p display and LTE. 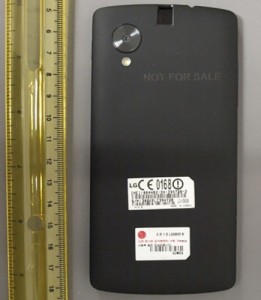 This could be the new Nexus 5 from LG and Google.

The Samsung Galaxy Note 3 is going to cost $299.99 on-contract across the board. That’s how much carriers charged for the previous two Galaxy Note models and it wasn’t surprising to see them stick with what worked. The expensive price tag is due to the device’s massive display and the bundled S Pen stylus but it does make it one of the more expensive on-contract devices on the market.

Nexus 5 pricing isn’t known but given the upgrade on the display (those cost money), the addition of LTE, the price jump of the Nexus 7, and the fact that the iPhone 5c isn’t anywhere close to the Nexus 4’s $299 price point, we could see Google pushing the Nexus 5 up to around $399 for a 16GB mode and $450 for a 32GB Nexus 5. Both unlocked of course.

An FCC filing, for a device that is likely the LG Nexus 5, points to support for AT&T, Sprint and T-Mobile. AT&T and T-Mobile, being the GSM carriers that they are, are a given. However, Sprint would be a new addition.

There was no support for Verizon listed and given the issues the carrier had with the Galaxy Nexus, it’s possible that we could see Verizon skipped over with the Nexus5. U.S. Cellular is extremely unlikely.

Both of these devices are going to be running Google’s Android but there is going to be a huge difference between the two operating systems.

Samsung’s Galaxy Note 3 is going to be on the other end of the spectrum. That’s because it will not only employ Samsung’s TouchWiz user interface over Android but it will also use a powerful and unique version of that software that will not only offer powerful multitasking but also offer software features for the device’s S Pen.

The company’s fingerprints will be all over the Galaxy Note 3’s software, for better or worse, making for a vastly difference experience than the one found on any Nexus smartphone.

Finally, buyers can expect a much more unpredictable software update experience with the Samsung Galaxy Note 3. The Galaxy Note 2 remains on Android 4.1 Jelly Bean, the software that was on board out of the box when it first arrived, and it’s clear that the Galaxy Note’s software shares at least part of the blame.

The original Galaxy Note is on Android 4.1 as well but it’s not clear if it will be getting updated past that, especially since users have been complaining about a host of issues including lag and battery life problems.

So, there is no guarantee just how long the Galaxy Note 3 will be supported for or how many big time updates it will get over the course of a two year contract. For many, this matters.

The Nexus 5 is going to be a little more predictable. Google typically offers several years of support and Nexus devices always get new Android updates shortly after they are announced. For example, the Nexus 4 was one of the first to get the Android 4.3 Jelly Bean update. It will also be one of the first to Android 4.4 KitKat.