Since first being announced in October and released in November we’ve seen countless different Nexus 6 deals surface, as well as a few for the Nexus 9. Today though, Google announced a brand new deal on the Nexus 6, Nexus 9, and all Android Wear devices delivering $50 cash back to buyers to use on the Google Play Store.

We saw a few pretty decent Nexus 6 deals back during the Black Friday frenzy, as well as a couple in January, today Google announced a rather neat deal offering cash back for buyers of most of its products, not just the Nexus 6.

In January Expansys offered up the phone for about $50 off, and if you were one of the unlucky few that missed that deal, today you have a similar option. Starting today, and ending on March 31st, Google is giving buyers a $50 Google Play credit or gift card to spend on apps, games, movies and more.

In our review of the Nexus 6 we praised it for being the best Nexus smartphone to date, offering some of the best speakers of any smartphone available, having excellent battery life and a stunning display. Yes, it’s a little big for some, but you’ll quickly get used to the size. However, we’d recommend trying it out in a store first before making such an expensive purchase. Thankfully the Nexus 6 is available from AT&T, T-Mobile, Sprint, and now Verizon, so head to a store and try it today.

As a reminder the Nexus 6 offers a large 5.96-inch Quad-HD display, a powerful quad-core processor with 3GB of RAM, 32 or 64GB of storage, and a quality 13 megapixel camera with optical image stabilization. It’s the first Nexus phone with a big battery, coming in at 3,220 mAh, so you won’t be searching for a charger halfway through the day like most do with the Nexus 5.

Speaking of the Nexus deal currently going on. Those who buy the Nexus 6, Nexus 9, or any Android Wear device (including the Sony Smartwatch 3) before March 31st, will get a $50 Google Play gift card or credit to their account to buy whatever they’d like. Accessories, apps, games, music, movies, magazines and more.

Speaking of the Sony Smartwatch 3, if you buy that you will also get $50 off (it’s on sale), as the GPS-equipped device has been discounted from $249 to $199. Making it essentially $150 when you consider the Google Play Credit you’ll get in return. 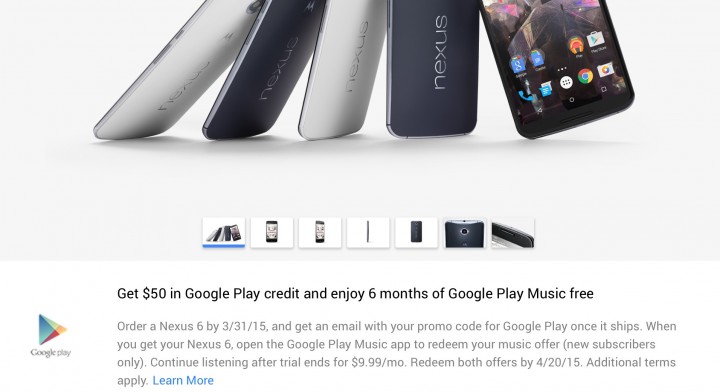 It’s worth noting that Google’s devices are no longer for sale on the Google Play Store. Instead, the company now has its own Google Store with all its devices. From smartphones and tablets, to Chromebooks, Android Wear Watches, the Nest and the Nexus Player. Meaning you’ll have to go to the new Google Store to buy your device, then get your $50 credit and savings.

Google isn’t done either, those who purchase any of the devices mentioned above will also receive six months of Google Play Music All Access completely free, rather than paying $9.99 a month for the unlimited music streaming service.

What this all means is that Google’s offering tons of incentives this month to buy a new Nexus 6, Nexus 9 tablet or Android Wear smartwatch. There are multiple options, storage configurations, or watches to suit any buyers needs. Hit the links below and buy one today.

Oh, and all these devices are available with free shipping. Meaning Google’s giving buyers multiple reasons to get a new device right now. Buyers will get the $50 Google Play credit once the device ships, and you have until April 20th the claim the code and enjoy the $50 to buy whatever you please.