In this early Samsung Galaxy Note 4 vs Nexus 6 comparison, we take an in-depth look at some key differences between the two new Android flagships that are scheduled to hit shelves this fall.

On September 3rd, Samsung took the stage to announce its fall products including an all new Galaxy Note 4, the company’s fourth-generation Galaxy Note and a device that will replace the Galaxy Note 3 as its flagship this fall. The Galaxy Note 4, like the Samsung Galaxy Notes before it, comes loaded with high powered features that should help to make the Galaxy Note 4 one of the best, and perhaps most popular smartphones on the market.

The Samsung Galaxy Note 4 will be matched up against an armada of big name smartphones including the iPhone 6 Plus, LG G3, Samsung Galaxy S5, Samsung Galaxy Note Edge, and the Moto X. It’s also going to have to compete against a brand new Nexus 6 from Motorola and Google, a large screen flagship Nexus that’s expected to touch down in just a few short weeks.

Earlier this week, after months and months of rumor, Google announced the all new Nexus 6 from Motorola. Google did not take to the stage like Samsung but it did outline many of the Nexus 6’s important features including hardware, software and more. Like the Galaxy Note 4, the Nexus 6 comes with a massive display. It’s also going to find a home on a large swath of carriers, something that should help to make it extremely appealing to U.S. buyers.

With a Galaxy Note 4 set to hit shelves tomorrow and a Nexus 6 release date on the way in November, we want to take an early look at the most important things buyers need to know, right now, about the match up between the Galaxy Note 4 vs Nexus 6. Our goal is obviously to help send you down the right path if you’re in the market for a new smartphone.

The first thing that buyers need to know is that both the Samsung Galaxy Note 4 and Nexus 6 come with massive, Quad HD displays. We’ve been using the Galaxy Note 4 for a couple of weeks now and the quality is absolutely stunning. Quad HD is not a gimmick and it puts Full HD displays from last year to shame. The Nexus 6 does not use a Full HD display.

Like the Galaxy Note 4, the Nexus 6 comes with a Quad HD display that should also provide stunning looking content. Quad HD truly shines with things like photographs and both of these devices will almost certainly provide great looking photos, video and more. Here is the breakdown of these two beautiful displays:

You’re going to get similar resolution but the Nexus 6 display is actually .3-inches larger than the Galaxy Note 4 display. This might not seem like much but that extra real estate is going to be enticing to gamers and those that love to watch movies and video content on their device.

These two displays come with a cost: Overall size. Google’s new Nexus is taller, wider and thicker than the Galaxy Note 4 though the Galaxy Note 4 is a bit heavier than Google’s new flagship. Both of these phones are absolutely massive though and both are much larger than your standard smartphone. The photo below will give you an idea about how the two phones compare. 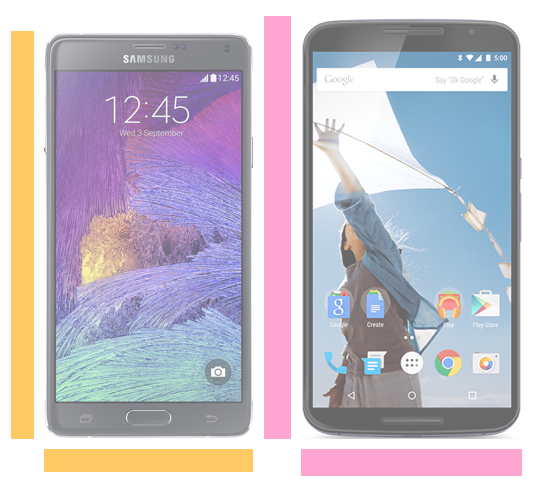 The Nexus 6 design borrows heavily from the Moto X 2014 design including a curved back with a metal trim around the sides. Samsung’s Galaxy Note 4 also features a combination of plastic and metal including a metal rim around the side that gives the device a more premium look and feel. These are both steps up from the designs found on their predecessors.

There is, however, one key difference that we should point out. While the Galaxy Note 4 did not get outfitted with the IP67 dust and water resistant certification that Samsung tacked onto the Galaxy S5, the Nexus 6 does come with water resistant qualities. The feature is similar to what Motorola tacked onto the new Moto X design and something that makes the Nexus 6 a little more appealing to those that work in rugged environments.

The key thing to focus on here though is overall size. Both of these phones are massive and those of you with small hands are going to have trouble using them with one-hand.

These are two flagship smartphones from 2014 which means that they both come with the latest and greatest features. While we won’t review and compare every single Galaxy Note 4 and Nexus 6 feature here, we’ll run down some of the more important features that we think prospective buyers should keep an eye on going forward.

The features offer a better look at what the Nexus 6 and Galaxy Note 4 are capable of, but if you want to compare specs, here’s a look at how all of those stack up against each other.

Google’s Nexus 6 will be coming to five carriers in the United States. AT&T, Sprint, T-Mobile, U.S. Cellular, and Verizon will all stock the Nexus 6 later this year. This is a big difference from the Nexus 5, a device that arrived only on AT&T, Sprint and T-Mobile. We’re still not sure how much the Nexus 6 will cost on contract though a recent leak hints at a $50 price point.

Off-contract, the Nexus 6 is going to cost $650 for a 32GB model and $700 for a 64GB model. That’s far more expensive than last year’s Nexus 5 which remains on shelves as Google’s budget alternative.

U.S. carriers are charging anywhere between $700 and $826 for the Galaxy Note 4 off-contract. While we expect that price to drop, we may not see drops happen until much later in the year.