Now that Google’s impressive new Nexus 6P is finally official and available today for pre-order, buyers are likely considering all of their options in this size category. Arguably the most popular 5.7-inch smartphone is the new Galaxy Note 5, and below we’ll be going over a list of a few important details and key differences between these phones for potential buyers.

Back in August the new Note 5 was announced and released, over a month earlier than anyone expected. It usually debuts around the same time as the new Nexus, but this year was quicker, and it’s available from all carriers as we speak. The Nexus 6P though, was just announced yesterday, and won’t be in the hands of buyers for another 3-5 weeks.

The Galaxy Note 5 is a fantastic smartphone built out of all glass and aluminum. It no longer feels like a cheap plastic Samsung phone, but now the same can be said about a Nexus. The Nexus 6P is Google’s first all aluminum smartphone, and it comes in three colors. It’s a premium Nexus smartphone unlike any before it. Prospective buyers will want to read on for all the details about both smartphones, then choose what’s right for them. 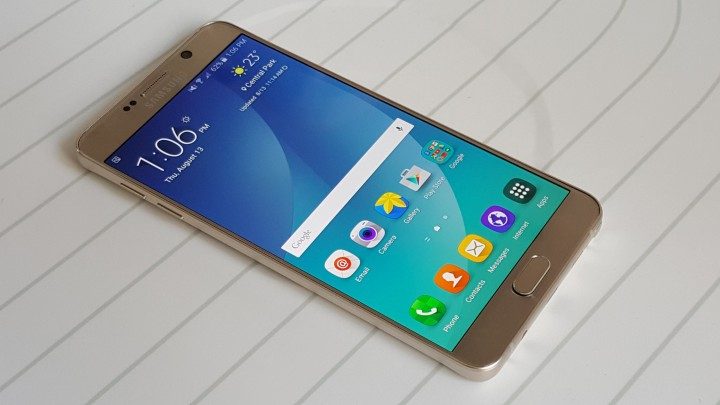 At this point most readers already know everything about the new Galaxy Note 5, as it has been available for over a month and has been selling extremely well. It has a bright and beautiful 5.7-inch Quad-HD display, glass and aluminum design, excellent camera, and a few other things. Our Note 5 review above goes into plenty of detail for those curious.

However, for the first time ever the Galaxy Note 5 doesn’t have a micro-SD slot or a removable battery, and this year Samsung actually made it smaller, coming in at just 3,000 mAh. This makes it even more similar to the Nexus 6P than ever before, as Google doesn’t have a micro-SD slot either. Both of these phones have some of the most up-to-date cutting edge hardware, amazing software, tons of additional features, fingerprint scanners, and some of the best cameras in the market.

The choice between the Galaxy Note 5 and the Nexus 6 from 2014 was probably easy for some, but now that Google’s delivered a compelling 5.7-inch aluminum phone with a fingerprint scanner, front facing features, a bigger battery and more storage all for a lower price point, buyers have a tough choice to make. And while these phones both have big screens and great cameras, there are a lot of differences buyers should be aware of. Lets get started.