The Nexus 7 Android 4.4.2 update is rolling out to users and we spent the last day or so using this new version of Android on the Nexus 7 (2013) model to see how it performs.

The Nexus 7 (2013) Android 4.4.2 update is available over the air and for manual installation, but the rollout is slow so you may not see an update yet, and checking for an update more than once a day won’t help. We’ll cover what’s new and what you can expect when you update to Android 4.4.2.

Read: What Not to Expect After Android 4.4.2

My Nexus 76 skipped right past Android 4.4.1 which arrived on some Nexus 5 devices, and this update is rather small, but it did bring speed enhancements in some areas and one slowdown in another area.

The two-minute video below shows what’s new on the Android 4.4.2 update for the Nexus 7 and illustrates a problem with slow downloads and web browsing.

Overall the performance of the Nexus 7 (2013) with Android 4.4.2 feels snappy with fast access to apps and overall navigation around the tablet feels slightly faster. I have not run into any app compatibility issues yet, and wouldn’t expect to find many as this is a relatively minor update.

The Android 4.4.2 update for the Nexus 7 2013 does make one noticeable update to the tablet experience, especially for users that use the Nexus 7’s rear camera. While taking photos, users can swipe to the right to see recent photos. Tapping on these will open the Photos app that is part of Google Now, rather than the Gallery app that it used to open. The change is small, but is a nice touch as I am using this app more thanks to the automated backups, nice image editing features and auto-awesome photos and videos. 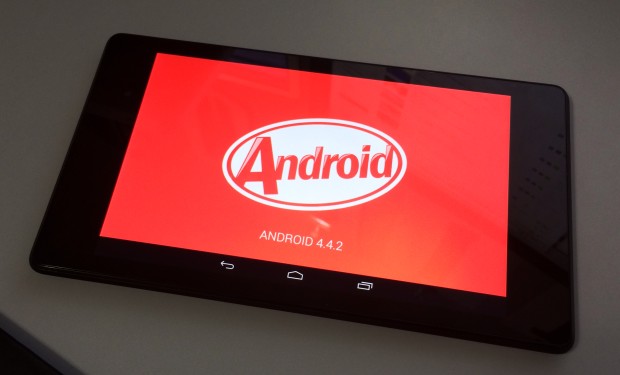 Check out what’s new and a potential Nexus 7 Android 4.4.2 issue.

One thing that is troubling is that the Nexus 7 is downloading webpages, apps and files slower after the Android 4.4.2 update. This takes place on two separate WiFi networks and when using a LTE device as a personal hotspot. At this point we are waiting for additional reports to rule out a glitch on our end or poor internet connectivity in the area before calling this an overall Android 4.4.2 bug.

Overall the performance of the actual tablet is good, so I am hopeful that the slow WiFi is not part of Android 4.4.2.

The Android 4.4.2 update for the Nexus 5, Nexus 7 and Nexus 4 is rolling out slowly to users, so you shouldn’t be concerned if you don’t see it yet, it should arrive soon.