Google has begun to roll out the Nexus 7 Android 4.1.2 Jelly Bean update today though it appears that the update is rolling out slowly as many Nexus 7 users remain without the update.

The software roll out was first noticed by EE Times who reports that the update rolled out for at least one Neuxs 7 user in Australia. The update doesn’t appear to be a massive update but it apparently does bring one big change for Nexus 7 users.

The prompt for the update says that the update will improve performance and stability and fix bugs that Nexus 7 owners have been dealing with. It does not specify what those bugs are. The big change that it brings is the ability to rotate the home screen to landscape mode. Before this update, it was impossible to do that. While not a mind-blowing feature, it’s certainly nice to have. 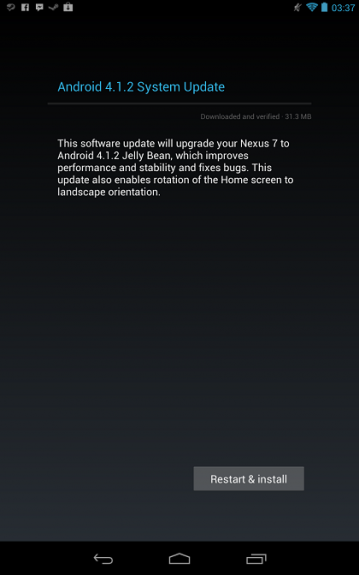 Android 4.1.2. Jelly Bean is heading out to Nexus 7 owners today.

Thus far, we have not received the update to Android 4.1.2 Jelly Bean on our Nexus 7 devices. We have tried the manual update method, but thus far, the update has not become available. Those who are looking to get the update now might have some more luck. To try and pull the update, try this method.

Some users use different combinations of Clear Date and Force Stop, others turn off their device then power it back on after clearing the data, but in the past the above method has worked.

For those Nexus 7 owners that are rooted and unlocked, we’re seeing that the update does not break these which means that installing it will be an extremely painless process.

The update is pretty small, a little over 30MB, so it shouldn’t take too long to download and install once it has become available.