Google unveiled a newer Nexus 7 tablet earlier this year, but that’s probably not all that Google has left in 2013 as far as the company’s tablet game goes. It’s rumored that it will still release a new Nexus 10 tablet at some point before 2014, and an interesting photo on Google’s Android website reveals that a brand-new tablet may be in the works at Google.

The image shows a woman holding a tablet browsing the Google Play store, but that isn’t no ordinary tablet. It’s certainly not a Nexus 7, seeing how the bezel is a lot thinner than the 7-inch tablet, but it’s also not big enough to be the new Nexus 10, since the woman looks to be holding the smaller tablet comfortably with one hand.

Instead, could it be the Nexus 8? It appears to be the middle ground between the Nexus 7 and the Nexus 10, and Google has never released a tablet with such thinner bezels before, so the tablet we’re seeing in this photo certainly does not exist yet. 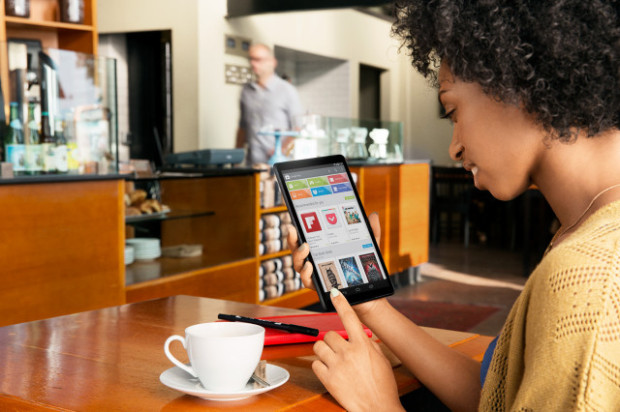 Of course, Google has never been one to shy away from putting Easter Eggs into its promotional content. Several months before the Nexus 5 was released, Google teased the phone in a video unveiling the KitKat statue on Google heardquarters. In that video, we saw several Google employees capturing the event on their phones, but not just any phones. They were Nexus 5 devices.

With that said, it’s possible Google is secretly teasing the Nexus 8, an 8-inch tablet that could be the same size as the Nexus 7, but with a larger screen and thinner bezels.

However, this certainly raises more questions than it answers. When will we see the Nexus 8 if it’s indeed real? And would an 8-inch Nexus tablet even be in demand, seeing how there’s already the Nexus 7 and Nexus 10? A lot of people say that an inch difference in screen size can make a huge difference in how you interact with a device, so we’ll ultimately have to wait and see if there’s even a market for a tablet like this, seeing how it’s so close to the Nexus 7.

As far as when we’d see a tablet like this, it’s possible Google could announce it later this month alongside a new Nexus 10, but it’s also possible that the company may be waiting until next year. It’s definitely not too late in the year to launch a new product, but big announcements are pretty much over for the year, and companies are mainly preparing for the holiday shopping season.