Besides better battery life, one of the last things that a lot of Samsung Galaxy Nexus owners on Verizon have been waiting for is the official NFL Mobile app. Up until today, the application did not support Google’s Android 4.0 Ice Cream Sandwich operating system which meant that Galaxy Nexus owners could not use it. Well, it appears that the application has been updated as the listing on the Android Market now says it’s available. Problem is, it doesn’t appear to be working.

Update: The app appears to be working today, even on custom ROMS, so get ready for some post season Football.

If you’re unfamiliar with NFL Mobile, it’s an application that allows you to access just about everything NFL. From news to highlights to games, you can access it all from your phone.

The Galaxy Nexus is of course a 4G LTE phone with a gigantic 4.65-inch display which makes it the perfect device for this application. 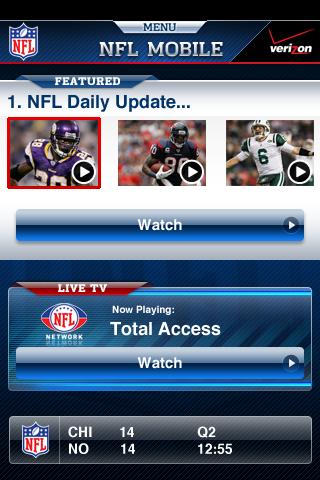 Now, I just tried to fire it up on my stock Galaxy Nexus and oddly enough, the application still says that it doesn’t support the device. And yes, I used Verizon Login. It didn’t work on a Galaxy Nexus with a custom ROM installed either. So it would appear that both the NFL and Verizon have some kinks to work out before the application works as intended.

If you want to take a stab at getting it to work on your Galaxy Nexus or other Android 4.0 device, you can head here to the market in order to give it a go. Let’s hope that Big Red is able to get it up and running soon.