Most tech enthusiasts are very passionate about their smartphone platform of choice, and some recent Nielson data gives both Android and iPhone users good talking points.

What is interesting is how much the iPhone and Android are biting into RIM‘s market share. In the last three months only 4 percent of new smartphone buyers opted for a BlackBerry. Meanwhile, 36.3 percent opted for an iPhone, and 54.6 percent chose Android. Shoppers chose “other” platforms 5 percent of the time. That’s more bad news for RIM, but good for Google and Apple. 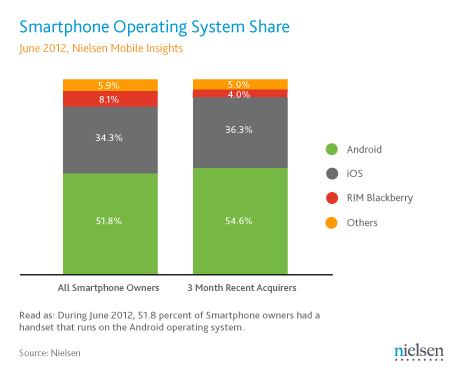 The amazing part is Apple is able to control more than a third of the market with just three smartphones on the shelves across three of the four major U.S. carriers. Two of the carriers only have two iPhone models, and neither of them are free like the iPhone 3GS. 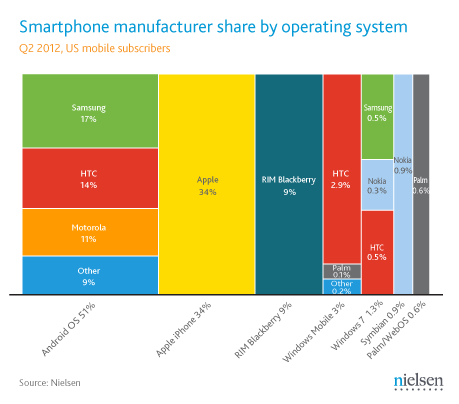 Samsung, on the other hand, has numerous devices in the market, many of which are just slight iterations on the main Galaxy S line. Motorola and HTC also have many models on the market, but both are cutting back to just a few models each year (though still more than Apple’s one new phone every year).

While the data is great for Apple and Android, it’s also depressing for Microsoft and Nokia. Nielson puts Windows Phone 7 in the “others” category in the first chart, and it shown to only have 1.3 percent of the market in the second. That’s still less than Windows Mobile. The 1.3 percent breaks down into Nokia controlling 0.3 percent of the market, while Samsung and HTC both have 0.5 percent.

With any luck Windows Phone 8 will help Nokia and Microsoft gain more market share. With RIM flailing there’s a potential for a new third ecosystem, and Microsoft has the money to spend trying to grab that spot. Nokia might want to quietly move forward with its contingency plan, just in case.