As I was winding down to get into bed after 2012 dropped, I checked Twitter one last time and saw a very interesting tweet from @ChevronWP7. They announced via twitter that they only have 18 tokens left and that they won’t be restocking.

What is ChevronWP7 and what are tokens? 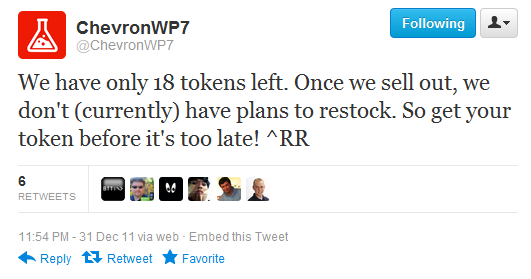 I saw this tweet and started looking into it further as I didn’t know the details of the agreement between the guys behind ChevronWP7 and Microsoft prior to this tweet last night. So, before I went to bed, I checked out the rest of the tweets I had missed earlier in the day to see what this was all about. What I found was that a) they sold almost 100 tokens on New Years Eve after they announced that they had just 98 tokens left and b) that they announced this back on December 14th, 2011. I will admit, I missed this and was totally unaware of the token limit.

Apparently Microsoft and the ChevronWP7 team had an agreement with Microsoft to only sell 10,000 unlock tokens. I am not sure why the limit was in place but it’s been reached and it’s over… for now. In the ChevronWP7 labs portion of their website, it shows that the tokens are sold out but it tells us to stay tuned to their blog and Twitter stream for updates. That leaves a little bit of a glimmer of hope for the people who didn’t get a chance to unlock their Windows Phone earlier. 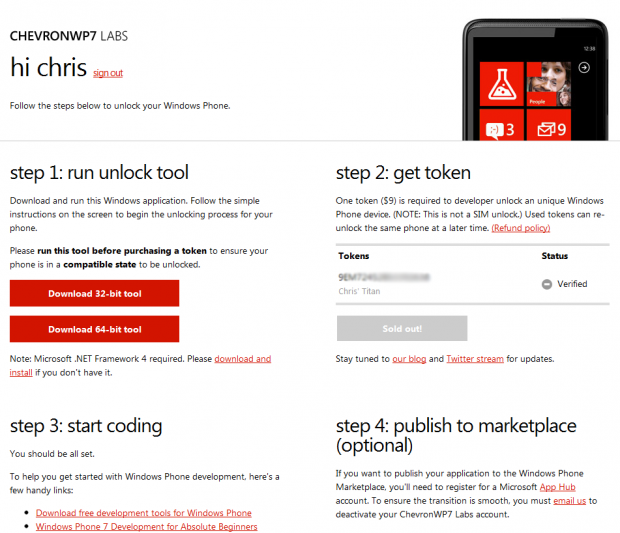 I was able to unlock my HTC Titan back in November using ChevronWP7. Sadly, the only reason I did this was to use an app that allowed me to take screenshots for reviews right on the device.

While reading the ChevronWP7 twitter stream, I found some exciting news from back on Decemeber 15th.

We’d like to remind folks that our unlock solution is officially sanctioned and is future proof. ^ RR

I am sure there will be something new come down, official or unofficial, to allow people to continue unlocking Windows Phone 7 devices again. There’s no doubt that there is a need for this and someone will step up and fill it if ChevronWP7 and Microsoft do not swing another deal. You can also pay $99/year to get developer access, but I doubt many consumers are willing to go through those hoops.

This is in deed sad news, but at the same time congrats are in order to the ChevronWP7 team for reaching 10,000 token sales.