At just under $20, Nokia 105  compares favorably to the iPhone 5 expensive smartphones in a few key areas, but it’s not meant to replace Apple’s devices. Instead, Nokia is selling the device to emerging markets, where 2.7 billion people do not own mobile phones of any kind, primarily due to cost.

Introduced today at Mobile World Congress in Barcelona, the Nokia 105 has the same general shape as almost every other affordable Nokia device from the past decade or so. Nokia’s low-end phones have always shipped with a black and white displays. The Nokia 105 comes with a color display, marking the end of Nokia’s monochrome era. 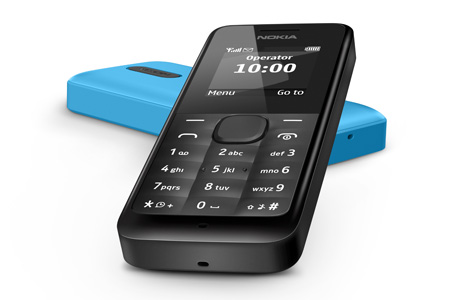 As you’d expect from a $20 device, the Nokia 105 doesn’t have impressive specs or features compared to the smartphones many take for granted. It can make calls, send texts, play a few pre-loaded games and learning apps.

There’s certainly not enough features to get  iPhone 5 users to trade in their devices for the Nokia 105, but the following features might make them wonder why Nokia can pack them into a $20 phone while they can’t have them in their $199 to $399 devices.

The Nokia 105’s battery can last for 35 days in standby mode on a single charge. Talk time is rated at 12.5 hours. Those are fantastic numbers, especially since it can be difficult to find a place to recharge phones in some of the countries where it’s being sold.

By comparison, the iPhone 5 can last a theoretical 9.4 days on a single charge, but many users struggle to get it to last through an entire day after configuring it with push notifications, location services and other battery hungry settings.

The Nokia 105 would make a great back up phone for those that are constantly struggling to keep their smartphones charged. It would also make a good spare phone to keep in the glove box or emergency kit. When push comes to shove, voice and text are really the two features people need most during and after natural disasters.

The Nokia 105 comes with an FM radio built in. The technology is cheap, compact and provides free radio programming without having to pay for carriers’ 3G data packages.

While some Android phones ship with FM radios, none of Apple’s devices do. Apple is very much in the business of selling entertainment, including songs, apps and videos. Its carrier partners charge an arm and a leg for data packages and overage charges. So why would Apple want to provide a free alternative?

3) Fraction of the Cost

The iPhone 5 costs $199 to $399 when paired with an expensive 2-year contract in the United States. iPhone 5 prices jump to between $649 and $849 when unlocked and unsubsidized. Sure, Americans can do all sorts of amazing things with 4G LTE, apps and the mobile web, but the Nokia 105 is being sold in some countries where the  average income is less than the annual cost of an iPhone 5 service contract on AT&T, Sprint or Verizon. The true cost of the iPhone 5 can runs into the thousands.

By contrast, the Nokia 105 will cost less than $20, which is obviously much more reasonable for workers in Vietnam, India and other places where Nokia plans to sell the phone. Mobile phone buyers must pay the full, unsubsidized price for phones in most countries, which means the Nokia 105 is at least 32 times cheaper than the iPhone 5.