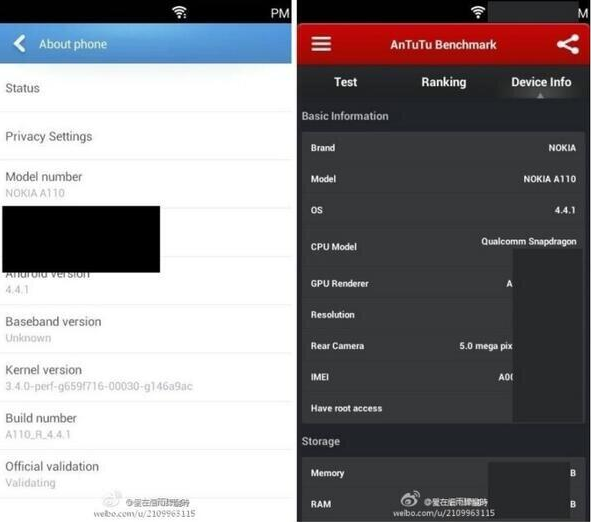 The second was the device’s CPU model, a Snapdragon. Unfortunately we don’t know which Snapdragon processor it is since a large portion of that part of the screenshot is also blocked from view. As most rumors indicate that the Nokia Normandy is meant to help the company compete in the low-end smartphone space, it’s more likely that the device will simply sport an entry-level Snapdragon processor.

To be clear, there are other devices that run Android 4.4.1, one of the latest version of Google’s Android operating system. Motorola’s Moto X smartphone runs the operating system. On the other hand, the overwhelming majority of Android devices being sold run on older versions of Android. For example, the Samsung Galaxy S4, the world’s most popular Android handset, runs Android 4.3. That’s a full version behind what Google ships on its own Nexus devices.

Of course, would-be buyers of the Nokia Normandy shouldn’t rejoice just yet. Nokia has yet to acknowledge the existence of the often-rumored device. To make matters worse, Microsoft is expected to clear the last hurdles holding it back from formally purchasing Nokia’s Devices and Services division. Should that purchase go through, and it looks like it will, Microsoft could immediately decide to kill the project before it ever reaches store shelves.

Read: This is Android Running on the Nokia Normandy