Today in Las Vegas at a press conference, Nokia announced the Lumia 900 which was teased at the AT&T Developer summit earlier in the day. The Lumia 900 joins the HTC Titan II as the only Windows Phone 7 devices in the US to operate on AT’&T’s LTE network.

Nokia’s CEO, Stephen Elop was joined by Microsoft CEO Steve Ballmer and AT&T’s Ralph De Le Vega at the press conference this afternoon to announce the Nokia Lumia 900. The Lumia 900 is the 3rd in the Lumia series, all running Windows Phone.

According to Mr. Elop, the Lumia 900 should be available in the coming months, initially on AT&T.  During the questions and answers sessions, a question was asked about other carriers and it was left open-ended, leaving hope for Sprint, T-Mobile, and Verizon. 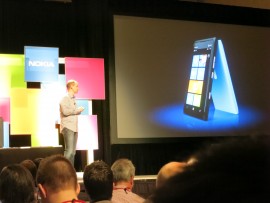 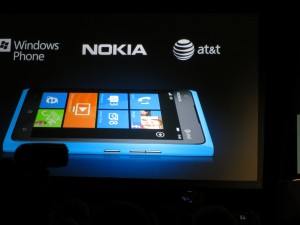 The Lumia 900 will have a very comfortable 4.3″ AMOLED ClearBlack Display, it will sport a massive 1830 mAH battery, 1.4 ghz single core processor, and camera parts that Nokia is famous for – Nokia’s exclusive Carl Zeiss optics, with large aperture (F2.2) and wide-angle focal length (28mm) for high-quality, uncropped 16:9 images even in low-light conditions. To top that, Nokia has added a wide-angle front facing camera as well.

“Nokia and AT&T worked hand in hand to bring the Nokia Lumia 900 to market. Our powerful 4G network really amplifies the benefits of the Nokia Lumia 900. Sharing high quality images and videos with its integrated social networking functions is faster than ever; content from U-verse Mobile is more enjoyable on the crisp 4.3-inch screen, and with its huge battery people can do more without worrying about recharging,” said Jeff Bradley, senior vice president of devices for AT&T. “Together, we are working to supercharge the ecosystem around the Nokia Lumia 900 and the Windows Phone platform.”

Available colors at launch will be black and cyan. According to Nokia, the pricing and exact release date are uncertain at this point but Elop indicated that Nokia get into the US smartphone market with aggressive pricing. On stage, De La Vega indicated that they plan to release the Lumia 900 on the AT&T network in the next couple months.