Nokia has placed a new countdown timer and Flash animation on its Facebook page, counting down to ‘something new.’ Though the countdown was vague, the Flash animation was inadvertantly named as the Belle Teaser, to which the company had later renamed to just ‘Teaser’ to remove allusions to the Symbian Belle software update to the Symbian^3 operating system. In addition to the Belle software announcement, the countdown to August 24th may also pave way to new hardware announcements as well.

In the past, new Nokia 600, 700, and 701 devices had been rumored under the codenames Cindy, Zeta and Helen respectively. By Nokia’s new naming convention, the higher the three-digit series number, the higher end the hardware. With the 700 series, it’s expected that the Nokia Helen will be the successor to the Nokia C7 device, which is a consumer-class Symbian phone; the C7 launched in the U.S. as the Astound on T-Mobile USA. These next-generation Symbian smartphones will support beefier single-core 1 GHz CPU and the Helen will have an 8-megapixel camera while the Zeta will have a 5-megapixel camera. 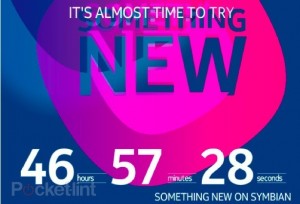 In previous leaks of the Symbian Belle OS, we’re going to see the Symbian^3 platform looking a lot more like Android. With the TouchWiz-style icons that came with the prior Symbian Anna update, Belle will also add a drop-down notification bar, toggle switches within the notification bar for radio settings, and speed improvements.