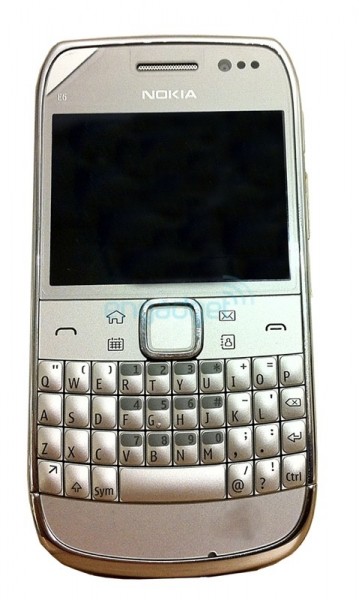 Nokia may be poised to introduce its next generation messaging and emailing Symbian smartphone with enhanced specs. The device’s picture, which was leaked to Engadget, shows a form factor that could challenge Research in Motion’s BlackBerry and Motorola’s Droid Pro. As part of Nokia’s E-series smartphone lineup, the E6 would be targeted at business and enterprise users who enjoy the productivity feature–highlighted by the device’s front-facing keyboard, while not skimping out on multimedia and consumer-centric applications, like the 8-megapixel rear camera with dual-LED flash that may be similar to the shooter on the company’s E7 handset, which has a a landscape-oriented sliding keyboard.

The form factor of the E6 was popularize by legacy smartphones such as the E71 (AT&T had made a big splash by pricing the E71x at $99 on contract when it debuted, making it a truly affordable smartphone), E72, E73 (which as available as an E72 variant on T-Mobile USA), and the E5 smartphone. The E71 was a huge favorite as it was compact, yet offered a great typing experience due to the device’s raised keys, and came with excellent build quality due to the metal construction.

The E6 would be an evolutionary update to the front-facing keyboard lineup of E-series smartphones. Not a lot of details are known at this point, though it is speculated that the device will get a screen resolution boost to support a VGA display. In the past, up to the current E5, Nokia has used a paltry QVGA display, making its devices less appealing when making direct spec comparisons to current-generation BlackBerry smartphones–many of which come with HVGA though RIM is expected to make the jump to VGA and WVGA in the next versions–and the HVGA display of the Motorola Droid Pro. Increasing the screen spec would give Nokia a competitive playing field.

Also, it’s not certain of the current Symbian^3 platform will make it the E6, though it’s very likely. In the past, Nokia has used its Symbian-based S60 platform on the E6’s predecessors. 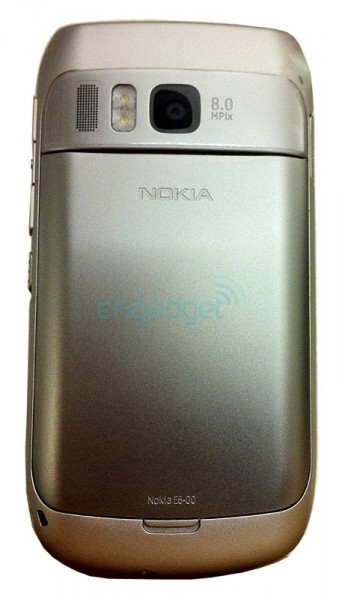 The camera on the back of the device also comes with a bump, similar to the design used on the Nokia N8, which is more centered around multimedia given the N-series designation. The bump on the N8, according to Nokia, is to accommodate a larger sensor on the device, which isn’t a bad thing considering the beautiful 12-megapixel digital still images captured with the Carl Zeiss shooter, Xenon flash, and mechanical shutter.

In the past, I’ve been a huge fan of the Nokia E71, which was the original predecessor the the E6 that’s pictured in the leaked images. The device has a more narrow form factor than the competing BlackBerry smartphones, which lends itself to better one-handed usability, meaning you can dial and text easily with one finger rather than requiring two hands to hold and two thumbs to type. Yet, despite its compact form factor, users can still type comfortably due to the raised keys of the device, which lends to better typing accuracy when using it and holding it like a traditional BlackBerry with two hands and typing with two thumbs. The compact form factor and versatility of the E71 makes it extremely useful when on the go. Also, of note, is that the keys are different than those on the Motorola Droid Pro and the BlackBerry Bold/Tour/Torch keyboards. Rather than having beveled key edges, the keys on the E71 were raised and had a bulbous center. From the photos, it looks like the E6 will retain the similar key design on its keyboard.

The device is speculated to be announced at Mobile World Congress later this month.